Daughters of the Mayflower - Book 10 in the Series 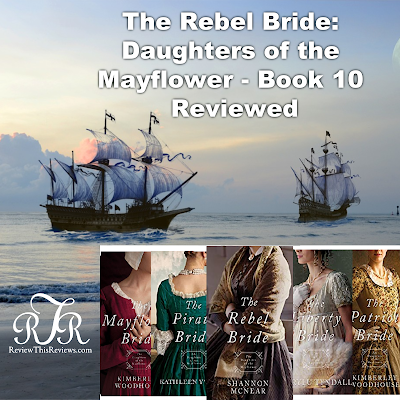 When I started this historical fiction series, I knew it included a book that took place during the American Civil War.  After all, it would be very difficult to write a series that includes major historical events and omit the civil war.  Nevertheless, this was the one book I did not look forward to reading.  I put it off for several weeks after I finished reading the 9th book in the series.  Only because it has been such a wonderful and well-written series, did I decide to go ahead and chance it.

I get so tired of reading books filled with opinions or propaganda about the American Civil War.  Frankly, it is one subject that will cause me to stop in the middle a book, put it down, and never finish reading if the author deems it necessary to spout vitriol. We all know wars are fought for many reasons and that evil criminal acts are overlooked in wartime.  Often the real reason one takes up arms against their brother is lost long before the first bloody battle.  Justification for invasion and brutality becomes the mantra of the day that reverberates for many generations that follow.

It turns out, I had nothing to fear about reading The Rebel Bride.  The author did not denigrate the soldiers. She simply set up a wartime situation where individuals are challenged to be honorable instead of depraved.

Ironically, this book turned out to be one of my favorites in the series.  I would like to believe that even in the midst of war, basic human decency and kindness still exist.


Rebel Bride (Daughters of the Mayflower)The war had already taken so much from Pearl MacFarlane.  Her 3 oldest brothers are casualties of war, lost in the battles of Shiloh, Fishing Creek, and Chickamauga. Her father is mentally broken, with only occasional moments of clarity.  Her mother, previously deceased.  Her youngest brother, and only remaining sibling, drifts away to places unknown, presumably hunting, as soon as he rises each morning.  The work of the farm is left almost completely to Pearl and there is only so much she can do.

When her cousin, a sergeant for the Confederacy, arrives with wounded prisoners of war, Pearl is not at all prepared to be conscripted to duty.  She doesn't have food, beds, or even training as a nurse, yet she is required to care for these men.  The physical and emotional toll on Pearl is tremendous.

Because her cousin has a soft spot for Pearl, he sends a man to help her tend the prisoners.  Fortunately, Portius does know how to treat and bandage the wounds and amputations.  He also has the physical strength to help the wounded soldiers move when necessary.

At first, it is difficult for Pearl to aid the very men who could have killed her brothers.  At the very least, they represent the army responsible for their deaths.  However, as she nurses them, learns their names, their birthplaces, and hears stories about their lives, she sees the individuals as living human beings who need help.  In turn, there are a few who try to help her, if in no other way, by being respectful of her father.  Unfortunately, as with any group, there are some who would prey on the isolation and her vulnerability.

Not only is Pearl faced with providing food, shelter and medical attention to the enemy, she is further challenged by her romantic feelings for one of the prisoners.  In the midst of the American Civil War, a Confederate and a Yankee do not make an ideal couple.

The story of The Rebel Bride takes place in Tennessee.  Every county of Tennessee endured battles.  Homes and farmland were destroyed along the way, many were intentionally destroyed as threatened in the book.

During the Civil War, it is a fact that homeowners were required to take in wounded soldiers from both sides depending on which army occupied their area at any given time.  One renowned home, turned hospital, still stands and is located not very far from my own home.

Few people realize that Norwegian immigrants fought in the Civil War for the Union.  Shannon McNear includes a wounded Norwegian soldier in the group of prisoners tended by Pearl.

The only real fictional liberty that McNear might have carried too far in this book, is the marriage between a black woman and a white man (one of Pearl's older brothers).  Even McNear admits that it is highly unlikely that could have happened.

Surprisingly, I highly recommend this book.

Previously Reviewed Book from the Daughters of the Mayflower Series

In The Liberty Bride, Emeline Baratt is sailing home to America. Her allegiance to America is greatly tested when the unthinkable happens.


The Rebel Bride: Daughters of the Mayflower - Book 10 Reviewed by: