Daughters of the Mayflower - Book 6 in the Series 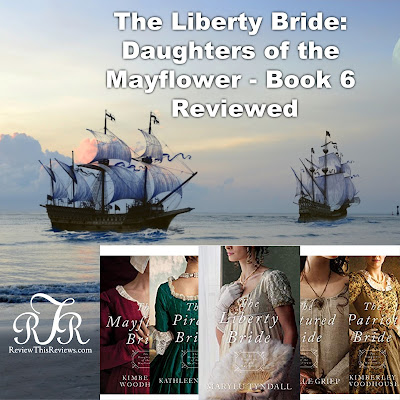 I've never found a series of books that I enjoyed more than the Daughters of the Mayflower series.

Every book is based on the life of one of the female descendants of a married couple from the Mayflower ship.  Each descendant plays a part in a pivotal moment in American history.

Just as each book has a different main character, each book is written by a different author.  Together, these books make a magnificent historical fiction series.

In The Liberty Bride,  Emeline Baratt is sailing home to America after the death of her aunt in Brighton.  Unfortunately, that voyage is during the War of 1812, which is fought between America and the United Kingdom.

Her allegiance to America is greatly tested when the unthinkable happens.

The Liberty Bride
Daughters of the Mayflower - Book 6Check PriceIn spite of the ongoing war between America and Britain, Emeline's father has sent his best ship, under the command of his most experienced captain, to bring his daughter safely home from the United Kingdom.  However, even a privateer ship is vulnerable to capture in wartime.  They are simply no competition to a heavily armed warship.

Emeline, the captain and his crew are taken captive when they are attacked by a Royal Navy frigate, the HMS Marauder.  Being a prisoner on a warship and being forced to work for the enemy is not something anyone would desire.  But, there is obviously an even greater danger for a female.

Realizing her perilous plight, and with the encouragement of her companion, Emeline makes the decision to tell the Captain of the Marauder that she is in fact a British loyalist following her father's demands to return to America.  She convinces everyone, including the crew from the American ship, that her loyalties lie with Britain.  As such, she is given tremendous freedom onboard the Marauder.  She hopes to be able to gain military plans and information that she could somehow pass along to American commanders.  What she doesn't realize is that there is already an American spy onboard and she has just make an enemy of a much needed ally.


More about The Daughters of the Mayflower Series


If you have read my previous reviews on books in this series, you already know these books are not only historical fiction, but they all have romance woven throughout the pages.  However, in the case of Emeline Baratt, she has no desire to marry, which is the basis of her conflict with her father.  She would prefer that men stop pursuing her and her dowry.  She wishes to be an artist, not a wife tied to a home and domestic chores.  I very much enjoyed the way the author, Mary Lu Tyndall, developed a romantic plot in The Liberty Bride.


Previously Reviewed Book from the Daughters of the Mayflower Series


The Liberty Bride: Daughters of the Mayflower - Book 6 Reviewed by: