My 10-year-old grandson David has recently developed a big interest in wolves. When I visited him last Fall, he was showing me the book about wolves he'd recently acquired and told me how much he liked wolves.  The family had just moved into a new house and David has a new bed.  His parents got him wolf design sheets and a beautiful Wolf comforter.  His whole bedroom is in wolf design.


David asked me if I would make him a plush wolf to go along with the other stuffed toy animals I had crocheted for him in the past. I told him I would and he was to look for it at Christmastime. This, of course, gave me the idea to add another wolf-related gift to the stuffed toy.

I went shopping for pajamas in a wolf-theme to go along with David's wolf-themed bedroom.  The pajamas I found were a one-piece union suit style with, not only a wolf-design for the pattern on the material, but also an attached hood he can put over his head and eyes, giving him a Wolf appearance!  He absolutely loves these pajamas.


This Wolf Union Suit is a product of the Cat & Jack line of sleepwear carried by Target.  It is made of 100% polyester of flame-resistant fabric, meeting the U.S. Consumer Product Safety Commission sleepwear requirements.  It has a cozy hoodie and banded cuffs and a half-length zipper at the front.   It comes in gray & white and the design is of sporting wolf silhouettes in white and gray shades against a dark gray backdrop.  The hoodie displays a wolf face for a ferocious look for fun.


Cat & Jack is a children’s and babies clothes line rolled out by Target in 2016.  It replaces it's Cherokee and Circo kids label.  Cat & Jack was begun after getting feedback and opinions from a range of children.

Target carries a number of animal print and design sleepwear for kids. While looking for the wolf pajamas, I saw a Shark Union Suit and also pajamas in movie themes such as Jurassic and Star Wars, as well as superheros and favorite  sports teams.

There are also Unicorns and Llamas sets for girls, as well as many other cute & cozy PJs girls will love.


David wears his wolf pajamas as many nights as he can, but I think another Cat & Jack pajama set is in his future as a gift from grandma.  His birthday is coming up in April.  :-)

The Wolf Union Suit by Cat & Jack is not currently available, but there are many others in fun themes now available.  Check them all out on the Target Website, or in a Target store near you under the Cat & Jack brand. 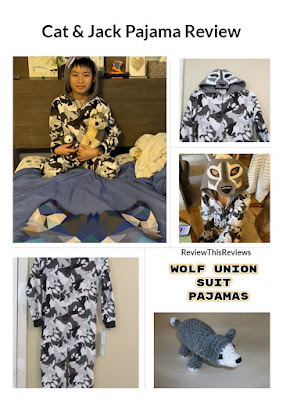