My television stopped working and couldn't be repaired. It was a sad day that sent me out looking for a replacement. My #1 criteria while looking for a replacement TV was expense. I wanted to spend as little as possible. Fortunately, I found the Insignia Roku 32" LED television.  The out-of-pocket price tag was slightly higher than I wanted to pay but in the long run, I'll continue to have significant savings because I'm refusing to buy cable or dish services at this point in my life. I've had this Insignia TV for almost a month now and I'm loving it. If you are looking to stop making yourself cable-poor, this may be an option that works well for you too.

I window-shopped at several stores, looking to buy a television at $100 or less. Then I found the Insignia Roku 32" LED TV at Best Buy. I thought about it for a bit and asked around.

With this television, I could continue to watch via antenna (which is my preference, and why I thought I'd get a TV for under $100).

Also, with this television, I could watch my Sling channels and YouTube.

I could also watch Roku, which my son keep telling me to check into.

The official features of the TV are listed as:


I unboxed the TV and attached the legs. I plugged it in and attached my antenna. The television prompted me to connect my Wifi.  I also easily followed those prompts to add my existing Sling TV account, Amazon prime video library, and YouTube channel.

Because the Roku TV has so many viewing options, I find it slightly cumbersome to remember to toggle from the two menus (the one on the left of the screen that lists things such as: home, My Feed, Search, Settings, and more) to the visual menu on the right that lists such things as: AV, Antenna TV, Netflix, Prime Video, Sling, YouTube, and etc. But that is a mild annoyance, and something I am becoming accustomed to. And an exceedingly small price to pay for a huge amount of free (or nearly free) entertainment.

I gotta tell you, I LOVE watching my YouTube crochet tutorials on the television screen. I could sit all day and watch the DIY channel on Sling. And what fun to watch my Amazon prime movies on a screen bigger than my laptop screen!


Except for a 2 year (approximately) period of time that I gave cable a second chance - a chance to redeem themselves and a chance they squandered, I have watched television via the channels broadcast over the air. To do this, I use a little antenna that screws in to the back of the TV. Easy peasy and free local channels.

This indoor antenna is the new and improved version of the antenna I've used for the past few years. 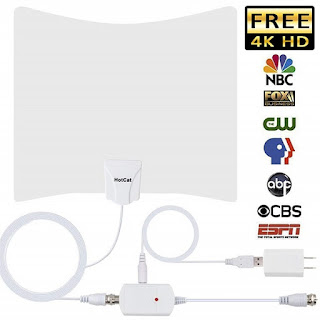 The least expensive internet connection that I have found, and that suits nearly all my needs, is the Jetpack by Verizon. It is a portable, mobile hotspot device that I use at home or when I travel. The "unlimited" data isn't fully unlimited. I do have internet connection for the entire month but if I do a lot of streaming, after a certain point I experience "bandwidth throttling". Which means they set me at slower speeds. It is occasionally annoying but not enough to cause me to purchase one of the other packages.

Unfortunately, my Verizon Jetpack does NOT work while I'm at The Shack. Hopefully, by the time I relocate, Verizon has stepped up and provides service in that area. Otherwise, I'll have to figure something else out.

I'd hate to make changes since this set-up is working so well. But I have some time to figure it out.


Fortunately, Sylvestermouse Cynthia introduced me to Sling via her review Get Rid of Cable TV and Still Have Live Major Network TV with Sling TV in 2015. Since that time, I have been able to watch DIY, Hallmark, FYI, Food Network, Travel, Cooking, Disney, HGTV, and more on my laptop.

I pay a minimal monthly amount ($30) for Sling TV. I could pay less but it is "al carte" television and the channels I chose create the amount I pay. Now, with my Insignia Roku television, I can watch all of those channels on the television screen!

The savings by using Sling TV, other streaming entertainment options, and my Verizon Jetpack is significant (at least to me it is). When the cable company increased my monthly bill, it was approaching $150 a month.  In my current situation, I'm paying $30 a month for Sling TV and the Verizon Jetpack is a part of my phone bill which totals $110 a month. Cutting that cable bill saves my budget approximately $1,400/year.

Our Bev Owens reviewed her purchase, a Samsung MU6300 HDTV.  This would be a great television to own!  I love the colors and clarity of the picture on an HDTV.