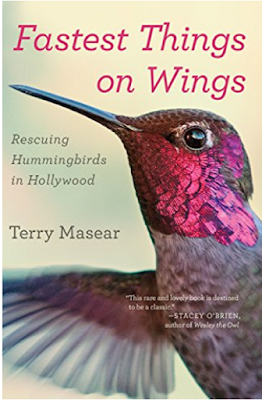 She huddles over the ice-cold, lifeless body wondering if any resuscitation effort can make a difference at this point.  It appears that Gabriel is gone, but Terry tries one last-ditch attempt to revive him.  While tenderly cupping the tiny hummingbird in her hands, Terry gently bathes Gabriel in the warmth of her breath, in the heat of her life-giving essence.  Against all odds, Gabriel responds with a twitch of the teeniest of feet.  And so the real work, magic, and mystery of rehabilitation begins.  Though the healing journey will be long and arduous, Gabriel is fortunate to have landed in the hands of Terry Masear, the miracle-worker you would want if you were an injured or desperate hummer fighting for your life.

To read Masear's Fastest Things on Wings: Rescuing Hummingbirds in Hollywood, is to enter the mesmerizing world of the astonishing hummingbird, along with gaining a deep sense of gratitude and reverence for the extremely rare individuals who choose to give all that they've got to save the lives of these magnificent creatures.  This book is far more than a fascinating chronicle of what it takes to rescue and rehab a day-old nestling the size of a bumblebee.  It is truly a love letter to be cherished by each of us who has ever known the romance of being in the presence of a hummingbird's majesty.  The rescue stories shared provide glimpses into both the human heart and the heretofore misunderstood, or unknown, nature of the world's mightiest warrior on wings.

Though seemingly fearless, Masear's patients reveal a tenderness and vulnerability few people ever get to witness.  Take Pepper and Gabriel, for instance — two birds that had previously experienced the kind of dazzling flight not even known by the highly vaunted Blue Angels.  Pepper and Gabriel could fly backwards, upside down, in a 360-degree spin or barrel roll, and dive at the speed of 385 body lengths per second.  As Masear notes, the grounded hummingbird, the one with serious back or wing injuries, is the one that often elicits the greatest heartache in the rehabber.

"Young hummingbirds like Pepper who have lost everything at such an early age hit me hard, even after all of the tragedies I have seen in rehab.  Their memory of flight and overpowering desire to float freely again drive every fiber of their being and make me want desperately to help."

As we accompany Masear on her daily rehab rounds tending to hummingbird victims, we meet birds that have somehow survived being driven down the Los Angeles freeway at speeds in excess of 70 miles per hour, while trapped under flapping windshield wipers, for over 90 minutes, plus victims of limousine windshield collisions, and birds trapped in sky-diving wind tunnels, along with victims of encounters with cats, dogs, tree-trimmers, soccer nets, and hummingbirds injured by both their own species and the human species.

You are sure to develop an affection for Brad, Iris, Pepper, Gabriel, and any number of other rehab patients.  These extraordinary hummingbirds teach us all vital lessons about nurturing others, about the nuances of healing both body and spirit, and about the powerful connections that defy previously held notions about the relationships that are possible between humans and hummingbirds.  You don't have to be involved in animal rescue or rehabilitation to appreciate the intricacy of Masear's ministrations to the baby hummers she affectionately calls the "naked babies" (newborns), the "bobbleheads," or the "dinofuzz."

But, if you happen to have previously engaged in saving the life of a precious animal, this book is likely to touch your heart in unforgettable ways.  It is now the height of hummingbird season where I live.  I found this to be the perfect time to immerse myself in Masear's mission to help all hummers not only survive, but thrive.  Though I have read volumes about hummingbirds in my quest to know as much as possible about these birds that I adore, I was delighted to gain so many new insights.  I highly recommend this book.  It is the type of tribute to beautiful creatures, and their loving champions, that will bathe your spirit with life-giving warmth.