The 1960's were a history lesson for many, but for a lot of us, we lived it and remember it well. The early 1960's saw many changes that today are like a blip on the radar. Technology has advanced in leaps and bounds over the last 50 years. Many of us are still reeling at how fast our world has changed and is continuing to change. 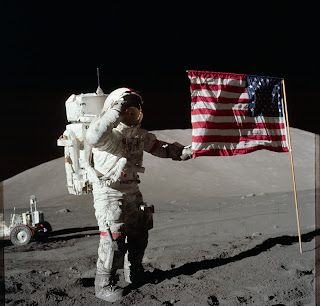 In the early 1960's when John Kennedy was President of the USA, he declared that man would walk on the moon! The people reacted in one of two ways, either they were awed at the prospect or many thought he was crazy. Still on that day in July 1969, 600 million people world wide watched and listened as the first person set foot on the surface of the Moon.

What has happened since?


One thing that has not changed, even though it doesn't hold the mystery that it once did,and that is, that the Moon still shines at night and lightens the darkness. The phases haven't changed and the face that the moon shows us is still the same one that was there centuries before. Love poems are still written and lovers still gaze upwards. Walking hand in hand in the moonlight is still seen as romantic and lovely. Writings and quotes like, "I love you, to the moon and back" are still being whispered in loved one's ears.


What about us has changed since then?


Scientists and naturalists are still fascinated with the Moon, it's cycles and the effects that it has on our world. That we are still intrigued,  has never been denied and will probably never change. Why? Well because the moon does have an effect on our world that can be measured and seen. It has an effect on our climate, growing schedules, and even our animals are affected.  The changing tides still fascinate people all over the world.  We are all part of the great Cosmos.


Since 1969 and the success of the Moon Missions, scientist, physicists, and more from the world of academia, are now looking at the whole of Space with new and renewed vigor. Outer space has always been an area of mystery and speculation. But with all the technology we have at our fingertips today, we can make calculations and predictions, we can see into outer space with orbiting telescopes and find what is "out there".

Our eyes have seen things we never imagined to be "out there" thanks to all of the emerging technologies that all started with the space program of the 1960's. Over the last 15 to 20 years we have made strides in understanding our solar system, we have sent probes and robots to Mars and seen the landscape up close and personal through the "eyes" of the Mars Rover. We have been able to picture the rings of Saturn and fly by the moons of Jupiter. All of these milestones don't make near the impact or impression today, as the landing on the Moon did in 1969. That is where everything started!


As Mr. Mark Sirangelo, Corporate Vice President for Space Systems, Sierra Nevada Corporation, speaking to the Senate Committee, re-iterated: "Space is multi-generational. One must respect and embrace the past as a key to the future. As my generation seeks to honor those who came before us by taking their achievements to the next level we must, at the same time, create the path forward for the next generation who, I am certain, will do amazing things that I can only imagine." (Status Report From: Senate Committee on Commerce, Science, and Transportation Posted: Wednesday, July 13, 2016)

Today we are using the technologies that have been developed for use in outer space, to make things better here on earth. Just the use of our lap tops, cell phones, and the ability to swipe our credit cards are all based on technology that was formulated for space exploration. We are able to help people with movement disorders, robotics to help people with mobility issues. Micro technology to help those with heart disease, nerve disorders, and a host of other discoveries. We look outside our solar system, but we also need to keep looking within and right here on earth, so that everyone can benefit from what we have learnt.

Where will all of this end? That's a good question and one that I'm not even going to try to figure out. One thing is certain, we need to keep learning about our world, and the space we inhabit, for everyone's benefit.