Review of the Book "Journey's End" - A Riveting Story 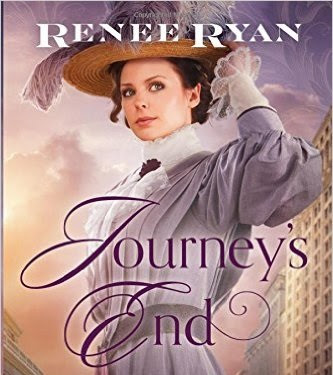 Journey's End by Renee Ryan is one of those books that once you start reading it, you simply can't put it down until you have finished the entire book.

I started this book after a very long and tiring day.  I was immediately drawn into the story and hated the idea of putting my Kindle down.  I kept drifting off to sleep and forcing myself to wake back up because I wanted to see what was going to happen next.  Needless to say, I finally gave in to sleep, but as soon as the morning light filtered through the window, I grabbed my Kindle and started reading again.

Few books can keep me from my morning work, but I simply had to get back into the "pages" and join Caroline on her journey once again.


Journey's End (Gilded Promises)                             The story begins with Caroline St. James disembarking from a ship that has just docked at Ellis Island.  At 22 years old, she set out from London, her home for her entire life, to avenge her mother's long-suffering and eventual death.  She plans to seek out the wealthy  grandfather who abandoned her mother and herself when they were in desperate need of help.  The one man who could have prevented an entire childhood of begging, stealing, and lying just to care for her sick mother.

With both of her parents dead, Caroline had no home or family, so there was absolutely nothing that could stand in the way of her planned vengeance.   She no longer had any loved ones who could be hurt by her actions.  She was determined that the old man would suffer for his callous disregard for the lives of his daughter and granddaughter.

Caroline changes her last name and ingratiates herself to her innocent cousin as a means to gain access to her grandfather.  She is thrilled when her cousin, Elizabeth, invites her to dine in her home.  She is so close to meeting the man who ruined her life and ensured the early death of her beloved mother by ignoring her repeated pleas for help.

When she arrives in the doorway, all eyes fall on her and there is complete silence except for the shattering of glass.  She finds herself facing her aunt & uncle who clearly recognize her.  Actually, it is not her they recognize, but who she looks like.  For a moment, they believe she is her mother.  After all, they haven't seen her mother, Libby, since she herself was 19 yrs. old.  When her grandfather enters the room, he is shocked, yet clearly elated to see her.   When she tells him that her mother is dead, the man is devastated.

Caroline soon realizes that her grandfather had not abandoned his daughter.  He knew nothing of her father's death and he had no idea he had a granddaughter.   He has not seen, nor had any word from his daughter since she disappeared in London while they were on a vacation.  That could only mean that someone in the household intercepted her mother's many letters and returned them unopened.

That's as much as I am going to tell you!  If you wish to unravel the mystery and find out who was the villain, you will have to read Journey's End for yourself.

This Christian fiction book is more than just a mystery.  There is also a love story intertwined throughout the pages of this novel, but it is also more than just a love story.  The love, the loyalty, the deception, the betrayal are all a part of what makes this a wonderful book to read.