A Movie That Touched My Soul: Love & Mercy

It occurred to me this morning that I do not often do movie reviews which is odd because my husband and I watch at least one movie per week. We rarely watch a movie for a second time but there are a few that we will decide to view at least once more.  Love & Mercy is one that we chose to watch a second time. The story moved me the first time and touched my soul even deeper upon the second viewing. 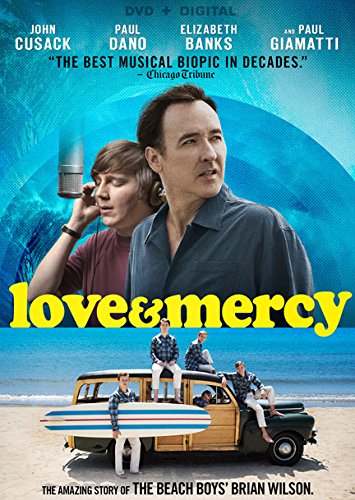 I can't imagine that there are very many people in the world who have never heard a Beach Boys song at some point in their lives. My generation listened to their music on the radio, danced to the songs at parties and traveled miles to see them in concert. They are a band that has transcended time and are loved by multiple generations. They are truly iconic in American music and rock and roll. Their music made us happy, made our feet want to move to the beat and sometimes made us sad. It spoke to us in many ways.

This movie tells the poignant story of Brian Wilson who co-founded the Beach Boys with his brothers Dennis and Carl. Brian was the leading force behind the band and wrote or co-wrote many of the songs that they recorded and performed. He is truly a genius when it comes to creating a song and has been innovative in the approach to recorded music. We see some of that genius at work in the movie.

What we also see is the tortured soul of a man who hears music in the most remarkable ways. We see a man who was abused by his father, pressured by the band to create hit songs and misunderstood by so many people in his life. We see a man being taken advantage of by a person who was supposed to be trying to help him heal. We also see the miraculous healing when the grace of love and mercy comes into a life. I don't think that anyone can watch this movie and not be touched by it in a multitude of ways.

There is a scene in the movie where Brian sits down and plays a melody on the piano for Melinda. She tells him that she thinks it is beautiful but she doesn't recognize it. He says that it was the music he heard in his head when he saw her. She is amazed and asks if that is the way it works, the song just comes to him. He says that sometimes it works that way, that it is something in his head or his soul and that sometimes the soul wants to come out and play. That explanation just blows me away. I just love the message....sometimes our soul just wants to come out and play.

I think it is a shame that this biopic film has not reached the acclaim that I think it deserves. John Cusack and Paul Dano do a remarkable job of portraying Brian Wilson as the musical genius and troubled soul that he is. We see glimpses of the influence of Brian's creativity on rock and roll music back in the 1960s and we see how even a celebrity can be manipulated by people who have their own agenda.

Personally, I love the movie Love & Mercy, so much so that I watched it a second time.