As someone who loves birds, and considers myself a beginner bird-watcher, I was vaguely aware that bird injuries via window strikes is a thing. But it was a distant thought and nothing I concerned myself with. I suppose I imagined that window strikes only occurred in cities with massive buildings, lots of glass, and limited outdoor space. And that only startled birds took flight and flew into buildings in their fright. I am finding that I was wrong about the frequency and locations of window strikes. I thought it important to pass on my experiences to our readers who may also be concerned about the safety of the birds in their communities. 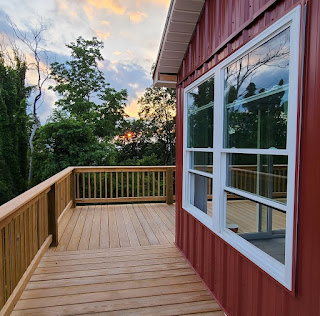 My Own Recent Experiences with Window Strikes Causing Death and Injury

I have recently moved to my new, small home that is located on a mountain ridge and next to a wooden area. Bird-watching is one of my favorite things here and was one reason I chose to locate my house on the property; next to the treeline where the most bird activity occurs.

My home is small. To take advantage of both natural light and the views, I have a window-door configuration at both ends of my home that in essence creates glass corners.  I love them and consider these to be the highlights of my home.  Unfortunately, I had not known that this window set-up is at high risk for window strikes.

My first clue was while the house was still under construction. I found a deceased Yellow-billed Cuckoo on a scaffold set up just under my bedroom window (one of the door-window configurations I mentioned earlier). All About Birds by The Cornell Lab states "Yellow-billed Cuckoos are slender, long-tailed birds that manage to stay well hidden in deciduous woodlands" and "Yellow-billed Cuckoos are fairly easy to hear but hard to spot."  How very sad that my first spotting of one of these bashful birds was via a window strike.   Still, I did not expect that there would be more window strikes at my home. I assumed that the Yellow-billed Cuckoo just was taken by surprise by my newly installed windows (installed just that week into openings that had been open for months due to supply chain problems).

Last week, I was sitting in my livingroom, in the corner window area, when a bird strike occurred. The bird was stunned. I was unsure about what to do - intervene and "help" the bird while knowing that typically human intervention with wildlife is often the opposite of helpful or leave it to fend for itself.  While I searched the internet for advice, the bird recovered enough to fly away.  It was then I realized that my home is the problem and not just a one-time problem. 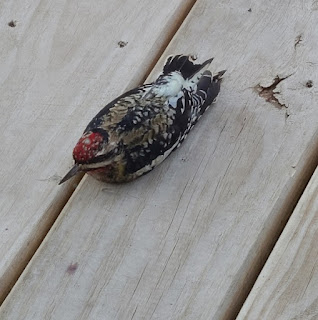 According to The Cornell Lab's All About Birds, "For birds, glass windows are worse than invisible".  Due to the reflections of the surrounding area, in my case the sky and trees, the birds see an area they'd like to fly into. According to the study they cite (2014) "about 1 billion birds die from window strikes each year". They also report that even birds that appear to be only stunned from the strike and able to fly away are often fatally wounded. Which is not happy news at all. (Read the article in it's entirety here.)

Not only do bird strikes occur during daylight hours when the glass reflects the surroundings (in the case with my home) nighttime strikes occur because the lighted windows divert migrating birds from their route. According to this article dated 2017, it is not fully understood why this happens. More research might find more current information about nocturnal window strikes and migrating birds. At this time, however, I am focused on learning solutions for my windows. As you can see in the photo above, the trees and sky are reflected almost perfectly in the glass. And that is what the birds are seeing and flying into.

Decreasing the Risk of Window Strikes

The short answer for decreasing the risk of window strikes in cases like mine is interrupting the reflection of the sky and trees.

Window screens.  Both bird strikes occurred on the glass (unscreened) portions of my window/door. Placing screen over the entire windows stops the reflections. This may be an option for me for my windows. But unfortunately, not for my sliding doors.

Interior curtains or blinds. These are definitely options for my bedroom door and window. Those areas could easily remain with closed curtains. However, the bird strike in the livingroom occurred with me sitting near the sliding door and looking out. Even with a curtain over the livingroom slider there would be extended periods of time that the curtain would be open and the birds at risk.

Bird Tape, One-Way Transparent Film, and Window Decals.  Covering the glass with closely spaced objects break up the reflection enough to deter the birds. The transparent film covers the entire window which makes the windows appear opaque to the birds but remain clear when on the inside looking out. This is the solution I'm researching and will probably pursue.  I want to preserve my view while protecting the birds I love so much.

As odd as it might sound, this is another reason I am thankful for my small house. I believe that is why I noticed the most recent window strike. I can only imagine how many occur and are never observed. If I had not heard the collision and seen that poor stunned bird on my deck, I would not have learned about how lethal windows are for our backyard and migratory birds. With this information I will be able to find a good solution. At this point I am leaning toward curtains for the bedroom glass and window clings for the livingroom glass. However, I am still researching Collidescape brand window "dots" and window film as well as the WindowAlert cling designs.