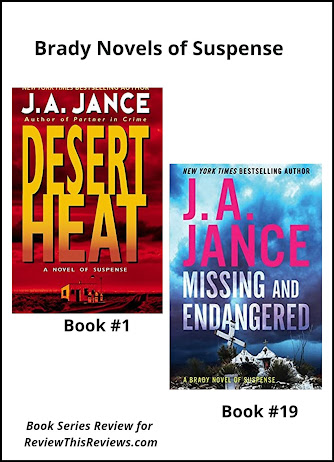 The Brady Novel of Suspense series is written by J.A. Jance, the New York Times bestselling author of the J.P. Beaumont series and the Ali Reynolds series, plus five interrelated thrillers about the Walker Family.

The Joanna Brady series are filled with beloved characters, small-town charm, vivid history, intriguing mystery, all with the scenic Arizona desert as a backdrop.

~ Quote from the book jacket of Book #18 'Field of Bones'

When the series begins in “Desert Heat”, Joanna is a young widow with a 9-year-old daughter (Jenny). Her husband Andy, a police detective in Bisbee, Arizona, was running for sheriff when he was killed by a hit man sent by the Mexican Drug Cartel he had been investigating. Encouraged to run for the office in his place, Joanna, who is also the daughter of a former Bisbee Sheriff, may have originally been elected on a sympathy vote, but she goes on to prove herself as a boots-on-the ground law enforcement officer.

Cochise County in SE Arizona is 80 x 80 miles square with the southernmost county line the international border with Mexico and the eastern country line the state line with New Mexico. The stories in this series of books take place in and around the town of Bisbee, AZ and throughout the 6400 square miles of the sheriff's office domain.  As you can imagine, this large of a territory to police produces a wide variety of crimes which often have to be investigated under extreme conditions of difficult 4-wheel drive locations and desert weather.

Each book begins with a Prologue which sets the scene for the storyline and introduces you to one or more of the characters. Sometimes the character is a victim; sometimes it's the protagonist whose identity we learn as the story progresses.

Another interesting thing about this continuing series is quite often when a new character is introduced in one book, we find that character appearing in subsequent books. We meet the character in one book and when they appear in later books, the author gives a brief summary of who they are as a reminder to the reader. It is a great way to keep track of who they are and what parts they played. From book to book, the characters all become very familiar to the reader. It also becomes a good way to know what happened to that character we first met, and what they are doing now.

*Note: It's rather like your new neighbors who just moved to town. They are strangers at first, but after awhile they become familiar friends.

The storylines in the Joanna Brady series may have murder and mayhem, but they are also filled with family life, interactions with friends and neighbors, introductions to new babies and the latest dog or cat or horse. After all, the sheriff, the deputies and detectives and support staff of the Cochise County Sheriff's Department are also people with family lives that exist outside of work. The stories also give fascinating descriptions to the countryside of southeastern Arizona filled with both desert and mountain areas complete with the sizzling heat of desert summers and the cold of mountain winters.

If you enjoy novels of suspense with a good story-line which also gives you the back-story of the interesting characters, you will enjoy this Joanna Brady book series.

*Reviewer's Note:  Author J.A. (Judith) Jance grew up in Bisbee, Arizona, a small copper mining town in SE Arizona. I find it interesting that she bases her stories in a real town. one she is so familiar with, and includes real location descriptions. It makes the fiction stories appear very real as if they are happening right now, along with giving you a bit of history of the town and the area. It's a history lesson, a murder mystery, and a suspenseful story, all with interesting characters  who, although fictional, seem like people you have always known.

I highly recommend the 'Brady Novels of Suspense' series by J.A. Jance.

Book Review of the Ali Reynolds Series by J. A. Jance