Book Review of The Ali Reynolds Series by J. A. Jance 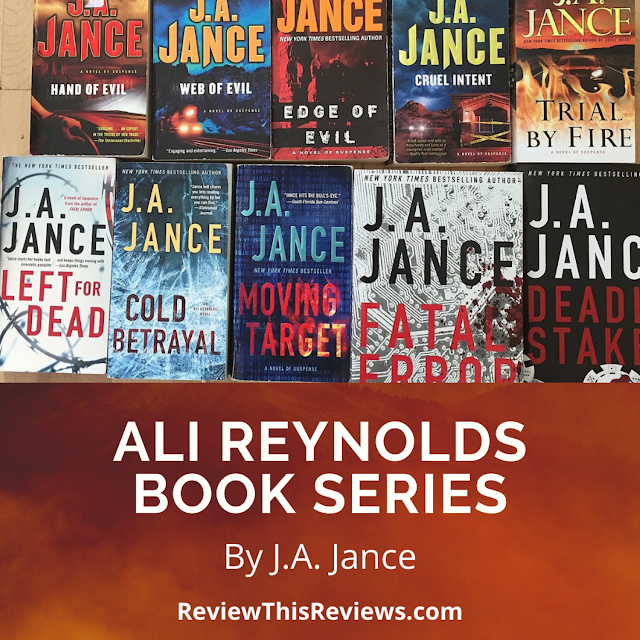 Author J. A. (Judith) Jance is the best-selling author of 3 mystery series and four inter-related thrillers featuring the Walker family.

This review is about her Ali Reynolds series.

Ali Reynolds is the main character is this series of suspense stories. Once a well-known TV News Anchor in L.A., Ali returns to her hometown of Sedona, Arizona after her career and her marriage come to sudden ends.

Ali grew up in Sedona where her parents run the Sugarloaf Cafe, a restaurant started years ago by her grandmother and later inherited and run by her parents and her mother's twin sister.

Ali's parents and the Sugarloaf Cafe play a large part in each book in the series. Some special culinary delights of the Sugarloaf Cafe are mentioned throughout this series of books. Interested readers may want to check out the 'Sugarloaf Cafe' section on the J.A. Jance author website for fun background stories and recipes.

Ali has a grown son, Chris, who is just finishing college as the series begins. Chris, who had been living in California with his mother, eventually also returns to Sedona and takes a job at the local high school as a teacher. He is also a metal artist.  As the series progresses, Chris meets a fellow teacher, Althena, falls in love and gets married. Thus, Althena then also becomes a regular character in the series.

Leland Brooks – an English Butler who is introduced early in the series and becomes an integral part of each subsequent story. Aged, but entirely capable, Mr. Brooks becomes Ali's personal assistant when she takes over the house where he worked as a butler to a wealthy lady and her daughter for many years.

Dave Holman – A good friend of Ali's who works for the local Sheriff's Department.

Sister Anselm. A Sisters of Providence Catholic Nun who works as a patient advocate for severely injured or ill patients who arrive unidentified and/or are non-English speaking. Sister Anselm speaks a number of languages and helps translate needed information between patient and hospital personnel. She also helps locate the patient's relatives. Sister Anselm is introduced several books into the series and quickly becomes a good friend to Ali. Thereafter, she becomes another regular character in subsequent Ali Reynolds books.

Bishop Francis Gillespie.  Sister Anselm's superior. Introduced to the series in the same book as Sister Anselm, he becomes another favorite character in the series.

B. Simpson, known simply as B. due to the unfortunate connotation related to his name matching that of a cartoon character (Bart Simpson), is an expert computer  programmer (and sometimes Hacker) who owns and runs a successful cyber-security company called High Noon Enterprises in Sedona.  When Ali needs help in one of her investigations, B. comes to her aid with his computer skills. As the series progresses, B. eventually becomes much more than just a friend. B's computer skills also often help solve crimes Ali becomes involved in.

Other characters who start out in the early books in minor roles ,and soon become regular characters in subsequent books, include computer experts Stu Ramsey and Cami Lee of B's company High Noon Enterprises.

In the first book in the series “Edge of Evil“ Ali finds herself caught up in an investigation into the death of her best friend. While evidence appears to point to the death being a suicide, Ali discovers that her friend was actually murdered. By the time Ali figures out who the murderer was, she is almost murdered herself.

The subsequent books in the series feature a continuing story.  Each book can be read as a 'stand alone' novel, but be forewarned that references in each book refer back to past stories. Thus, it is best to begin with Book One and read forward to understand who all the characters are and how they interact. Besides, the characters are as interesting as the stories themselves.

The Ali Reynolds Books in Order

Ali (Alison) Reynolds, a 40-something newscaster fired for aging by a Los Angeles TV network, who returns to her hometown of Sedona, Arizona, and takes up blogging (and subsequent crime solving):

I highly recommend this Ali Reynolds series, and any and all of the books by J.A. (Judith) Jance to mystery readers everywhere. Especially for those who enjoy having a woman as the main character.