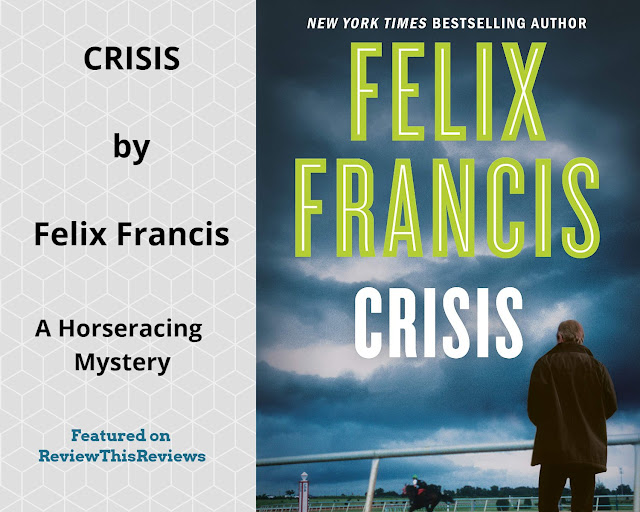 The title given to a book often reflects what the story is about. And sometimes the meaning of the title only becomes clear as you read further into the story.

In Crisis, a horse-racing thriller by Felix Francis, we learn in the opening paragraph that the main character, Harrison Foster (known as Harry), is a legal consultant and that his specialty is crisis management.

And today's crisis involved a murder – not that anyone knew it at the time.

Harry is sent by his London firm to Newmarket, the well-known center of thoroughbred horse racing in England, to investigate a fire which destroyed a stable block in the Chadwick family's stables and killed seven very valuable horses. One of the horses – Prince of Troy – was the odds-on favorite for the Derby. Turns out that there is far more to the  'simple' fire than initially thought when human remains are found in the burned out shell of the stable.  Since all the stable staff are accounted for, who is the mystery victim?

Harry knows almost nothing about horses; indeed, he actively dislikes them. But since he represents Prince of Troy's Middle Eastern owner who wishes to learn the circumstances surrounding his prize horse's death, Harry is thrust unwillingly into the world of thoroughbred racing.

Soon it is clear to Harry that the Chadwick family who own the stables where the horses died in the fire is a dysfunctional racing dynasty. There is deep resentment between the generations and sibling rivalry is rife beneath a thin crust of respectability. As Harry delves deeper into the unanswered questions surrounding the fire, and as he learns more about the secrets held by the Chadwick family, his life is put in danger. Can he solve the riddle before he is bumped off by the fallout?

Felix Francis is a British author, son of the famed author Dick Francis (former steeplechase jockey for the Queen of England and fictional crime writer of numerous horse-racing mysteries). Felix co-authored with his famous father on the last four of his novels. Since Dick Francis' death in 2010, Felix has continued writing Dick Francis Novels in the same vein, with 9 current books to date.  Number 10 (Iced) will be published in 2021.

Crisis by Felix Francis is an edge-of-your-seat horse-racing thriller in the Dick Francis tradition.

A book review of Crisis by Felix Francis, written by (c) Wednesday Elf.