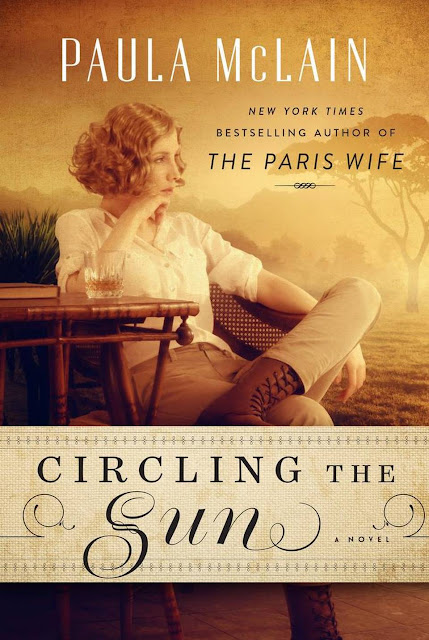 Another trip! This time my armchair travels took me to colonial Kenya, Africa via Paula McLain's historical biography Circling the Sun. Set in the 1920s, it is totally engaging, a fictional account of the real Beryl Markham's life. Beryl lived in what is now known as settler-era Africa. She was definitely a woman before her time and her story is very interesting.

It starts in England but is mostly set in Kenya where Beryl's mother abandons her with her father. Beryl embraces the local African culture and in the long run becomes a record-setting aviator. That is, after a a life spent conquering the male-dominated equestrian world and loving a man she could never have.

Do I Recommend Circling the Sun?


I do. I highly recommend Circling the Sun if you enjoy historical fiction and are intrigued with the idea of visiting Africa. This book sheds light on the life of a woman and a country that we have not heard much about.
I thought it was an enjoyable read but New York Times' writer Alexandra Fuller found it a bit fluffy. However, in her review she agrees that "the settlers who used Kenya as their hapless playground did so at catastrophic expense to those who called Kenya home long before the whites arrived." It is an interesting peek into the history of Africa.

As Julie McDowall said when she reviewed the book for the Independent, it it is filled with "vigorous, swift, and spangled with spectacular imagery." I came away wanting to visit Africa though of course I wanted to visit that country before I read this book. I also agree with McDowall when she said the story quickens near the end and that not enough time is spent on the one thing Beryl is famed for, her flying. If you want to read this book for the aviation, prepare to be disappointed.

The Boston Globe said, "McLain will keep you from eating, sleeping, or checking your e-mail — though you might put these pages down just long enough to order airplane tickets to Nairobi."  Exactly.

Circling the Sun follows Paula McLain's hugely successful novel The Paris Wife, which I can also highly recommend. That book is set in jazz age Paris and follows the life of Ernest Hemingway and his second wife.

Are you intrigued by the idea of visiting Africa? Will you visit via McLain's book? You can find Circling the Sun on Amazon by following this link.

Buy Circling the Sun on Amazon.