The Tales of Beedle the Bard Collector's Edition Book Review

The book The Tales of Beedle the Bard is a spin off from J.K. Rowling’s Harry Potter world. Using words translated by Hermione Granger, a thin volume was created. It includes text and pictures from J.K. Rowling and commentary from Professor Albus Dumbledore. Packed between the covers are five stories, fairy tales called The Wizard and the Hopping Pot, The Fountain of Fair Fortune, The Warlock's Hairy Heart, Babbitty Rabbitty and Her Cackling Stump, and The Tale of the Three Brothers. These stories share glimpses into the wizards of Harry Potter’s world.

J.K. Rowling created an affordable ‘ordinary’ copy of the book that mere mortals like you and I could afford. You can read my review of that book here. Interestingly, it was created with a wide variety of covers and even re-released in 2017 with a new U.S. cover.

Rowling also created seven magnificent copies of this story by hand. Those amazing books were given to people closely related to the series and one of them was auctioned for charity. Take a look at those amazing books here in this Youtube video and see what those that have been sold fetched at auction.


I do wonder what one of those original handcrafted books would sell for now. Anyway, Rowling also released a collector’s edition of the book as shown in the pictures on this page. This version was more readily available though still much more expensive than the 'ordinary' hardcover book.

This limited printing collector's edition of The Tales of Beedle the Bard is a beautiful set that was produced exclusively for sale on Amazon and released on December 4, 2008. I do not know what it originally sold for but as I write this page today in the spring of 2018, I see that it is available on Amazon at prices over $200 and on eBay where it appears to be more affordable, selling at prices starting around $100 and ending at about $230. 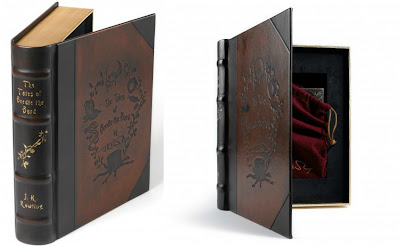 Included in the collector's edition are the five fairy tales that you find in all of the versions of this book. However, they are packaged in a handsome case that looks like a wizarding textbook straight from the library at Hogwarts School of Witchcraft and Wizardry making it a wonderful addition to a Harry Potter fan's collection.

Inside the case you will find ten prints that can be framed, a reproduction of J.K. Rowling's introduction, ten pictures that are not found in the standard version of the book and, packed inside a velvet bag, the copy of the book itself, which is embellished with a metal skull, corners and clasp as well as replica gemstones and a green ribbon.

All profits from the original sale of the book in 2008 originally went to the Children's High Level Group. Of course, that is not likely the case today. Click here to read more about the Collector's Edition of the Tales of Beedle the Bard on Amazon.

Buy your copy of The Tales of Beedle the Bard on eBay.
Find a great selection of Harry Potter gifts here.
Add a Harry Potter coffee mug to your collection.
Follow my Harry Potter board on Pinterest!