Book Review: Debbie Macomber's A Girl's Guide to Moving On

Moving On after a Divorce is Never Easy


Debbie Macomber's new novel, A Girl's Guide to Moving On, follows the emotional journey of two women after they divorce their husbands. Nichole had watched her mother-in-law Leanne look the other way for decades while her husband Sean had serial affairs. When she found her own husband Jake was cheating on her, she filed for divorce quickly, not wanting to suffer the humiliation Leanne had lived with for thirty-five years.

After Nichole filed for divorce, Leanne almost immediately followed her lead and divorced Sean. He had been a good provider and had tried to be mostly discrete, but Leanne's friends at the Country Club they belonged to always let her know what a tomcat Sean was. Though he was always polite about the small things, like opening doors and helping with chairs as etiquette dictated, he had no problem with betraying Leanne where it mattered most. Though he showed Leanne affection in public, he had not privately shown any for ten years in or out of the bedroom.

Nichole had seen enough watching Leanne to know that financial security wasn't worth paying the emotional price of ignoring Jake's infidelity. She knew if she did, it would become a pattern with Jake as it had with his father. Even though she knew living separately would be hard on them all, especially their three-year-old son Owen, she refused to let Jake shred her self-esteem by treating her as his father had treated Leanne.

Leanne and Nichole were both concerned that Owen might follow in the steps of his father and grandfather if there appeared to be no consequences. Nichole's filing to divorce Jake gave Leanne the courage to finally divorce Sean. Both women faced fear and insecurity in making this change from the comfortable life they had been used to.

More than financial security was at stake. Both women were emotionally shaken and had moved from the homes they had shared with their spouses when married. Both women also needed new friends, since the old ones they'd made at the Country Club seemed only interested in keeping them up-do-date on their ex-husbands' latest exploits. Debbie Macomber shows the steps they took to get on with their lives.

The Guide to Moving On is Born


After Nichole and Leanne had filed for divorce they moved into apartments across from each other and became even closer friends than they had been before. They had common hurts and common problems. They wanted to support each other emotionally as they faced their journey into new experiences. They made a list of what they needed to do to get on with their lives and heal. They called it A Guide to Moving On. This guide contained only three items (quoted from novel):

Nichole and Leanne follow the steps they created for moving on well. Each found a volunteer job she loved. For each the job paved the way for a new and very different man to enter her life. Nichole met Rocco, a tow truck driver with some very uncouth friends, when he hauled her out of a ditch she had backed into.

He asked her to return the favor by helping his teen-age daughter, the result of a one-night stand, learn to dress appropriately enough to stay out of trouble. He endeared himself to Nichole's son Owen by giving him a tow truck driver uniform and letting him "drive" a real tow truck. It's obvious to the reader a relationship is developing. But Rocco had a criminal record. After becoming responsible for his daughter, he had turned his life around to the extent that Nichole  trusted him.

His tattoos and rough manner would not have made him welcome at the country club, but Nichole could see that under his rough exterior he had a good heart. He still occasionally hung out with his biker pals at bars, but he now owned the tow truck company he used to work for and he hired some other ex-cons who needed a second chance to become good citizens. None of them disappointed him.

Meanwhile, Leanne, who had a master's in education, took a volunteer job in night school teaching English as a foreign language. One of her students, Nikolai Janchenko from the Ukraine, was about her age. He adored her and began to bake her bread as a sign of love.

He was a widower whose wife had died of cancer years ago. Gradually they began to date. Leanne began to return his affection.

Both Relationships Reach a Crisis Point

Just as the reader is getting ready for a happy ending for Leanne and Nichole, relationship disasters strike both of them. Leanne had promised Nikolai she would never again do things for Sean like clean his house or help him. Then Sean got terminal cancer, his other women ran from him, and Leanne felt she needed to step in. She could not simply desert him in his time of trouble after so many years of loving him. Nikolai stopped seeing her and even dropped the English class. Leanne was broken hearted.

About the same time Jake threatened Nichole that if she did not stop seeing Rocco, he would file to take custody of Owen from her. He had discovered Rocco's criminal record and insisted he was a bad influence on Owen. Nichole could not risk losing Owen. Without revealing the reason why, she told Rocco she could not see him anymore. He indicated he was walking out of her life forever, since he believed Nichole thought he wasn't good enough for her after all. Owen can't understand why his pal Rocco isn't visiting him anymore.


My Review of A Girl's Guide to Moving On 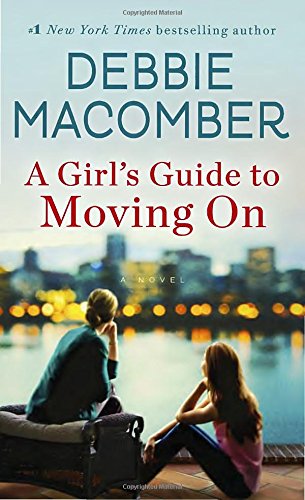 A Girl's Guide to Moving On: A Novel

I picked this up at the library in the new book section when the ebook I was reading couldn't keep me awake. I had fled the noise of workman at my house and wanted to read something that would interest me enough to keep me from falling asleep before I could go home. Debbie Macomber got me interested in Leanne and Nichole from the first page.

Although both Leanne and Nichole divorced their husbands, they felt they had no other choice because of the infidelity. Neither believed it would stop. But the divorces still hurt them and left them grieving the loss of their marriages. Neither was really looking for a new relationship when Rocco and Nikolai walked into their lives. Both women were courageous and supported each other emotionally as they faced an uncertain future and the problems in dealing with the changing relationships.

Macomber's portrayal of their struggles and their triumphs is emotionally realistic. Although the book is heavy, some of the minor characters added humor to lighten it up. Owen is a precious little boy who reminded me of my own when he was the same age.

I liked that neither woman took divorce lightly and neither violated her moral standards or set a bad example to her children, even though they did face temptations. I appreciated that. I was also impressed by each woman's desire to do the right thing, even when it hurt.

I think women going through the aftermath of a divorce will appreciate and probably identify with Leanne and Nichole as they attempt to get on with their lives. Those of us who are happily married will learn more about what those whose marriages failed go through so we can be understanding and supportive.

If you are a Debbie Macomber fan already, you will find this book a bit different than her usual romances, but you won't be disappointed. I won't spoil it by revealing the ending, but I found it satisfactory. I did not cry after reading it. I don't think you will, either. I wish there were a sequel. These are some of the other Debbie Macomber books I have enjoyed.

Here are the reviews I have written about these Debbie Macomber books.

Find more of my book reviews at Bookworm Buffet.

See the book reviews from our other contributors at Review This! here.