Skeletons in the Closet, Life is Unfair 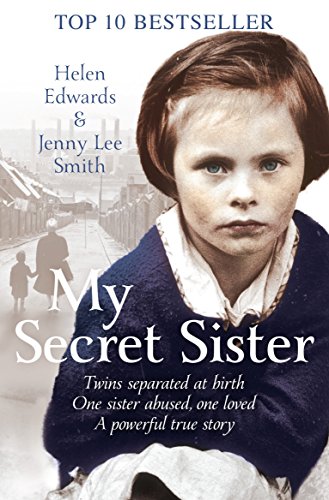 My Secret Sister: Jenny Lucas and Helen Edwards' Family Story
It seems to me that many people use the quote "Life is Unfair" in a very flippant way! Usually when they don't get their own way about things. In the True Life story titled My Secret Sister, this quote really means what it says. I'd like to share this book with you and some thoughts of mine along the way, come along on my Review of My Secret Sister.

Let's be clear, this is an autobiography of two women, who only recently became aware of each other. Their stories are on the opposite ends of the spectrum. Jenny Lee Smith and Helen Edwards only found out about each other recently. Through lots of lies, half-truths, and wanton disregard for their feelings, these two sisters are finally putting all of the questions about themselves and each other to rest. They are busy making up for 44 years of searching that finally brought them together.

Jenny:
Jenny Lucas had a charmed life. Oh she wasn't born with a silver spoon in her mouth, but her parents doted on her and she was the center of their universe.  The only child in a family where mom and dad were on the "older" side, she was the apple of their eye.  When her father took up golfing, he brought his daughter along and taught her how to golf too.  He even made her the very first golf clubs she used because she was only a little more than a toddler. Golf became her driving ambition. She was such a natural with the clubs and it gave her precious time with her father, whom she adored. When her father died, she really felt lost.  Cleaning up after his death, Jenny comes across a birth certificate.  It's the first inkling that she has about the possibility that she is not who she thought she was.  Not wanting to hurt her mother, she files this information away.

Helen:
Helen on the other hand was abused physically, mentally and emotionally most of her life. Her mother and father were either hateful, selfish and self centered at any given time. If any of those two characteristics came together at once, Helen paid the ultimate price for their mental state. Always told she was at fault for any and every turn of bad luck, she quickly learned to steer clear of her parents or do their bidding, whatever that may have entailed. Beatings at the hand of her father were not uncommon and her mother would just watch in a state of indifference, lest she also become a target of his rage.  Helen has an older half-brother who doesn't live at home anymore, but comes around trying his best to save Helen from his step father's wrath.  He is her "knight in shining armor."

For years these two girls each wanted a sister, a confidant, to share their stories, troubles and tribulations with. Each in their own way was longing for some sense of belonging that wasn't being fulfilled in their own lives.  It would be years though before they would find each other.
I don't want to give away too much of the story, but want to encourage you to read it.


Insights from my perspective:

If you know of anyone who is adopted, or if you are part of a circle of "Family Secrets", I want you to understand that those secrets can be very destructive and divisive.  They hurt people who are looking for answers.  If someone in your family comes to you with questions and they are old enough to know the answers, I would encourage you to talk to the parents, but if they are no longer alive, then tell them the truth.  Don't sugar coat the truth, don't make excuses, don't embellish the story, just tell them what you know to be truth.

I am so grateful for the opening up of adoption records, so that children who want to know about their birth parents have that opportunity.   It doesn't mean that everything will be rosy and perfect, there is no such state in life, but it gives the person seeking answers, a hope that could fill in a lot of blanks.

From my own experience, I have an adopted grandson and I'm so thrilled that he is in our lives. He came to us at 2 days old.  He knows he's adopted and he also knows that we love him dearly. When and if he wants to know more he will be told the truth by his parents (my daughter and son-in-law).

I also have a niece that was given up for adoption 40 plus years ago.  We (our whole extended family) became reunited 3 years ago.  It was a most joyous celebration of lost family, found. She was able to express to her birth mother that she was happy, and the birth mother had a hole in her heart filled. We have her in our lives again and it's wonderful.

Unwanted pregnancies are as old as time itself.  It is high time that we take the stigma off of being born "out of wedlock" or "not wanted" and realize that when children are given up for adoption, the mother and/or father are trying to make the best decisions for their child.  They should be applauded for understanding that they may not be equipped to be the best parents, but they should also be ready to possibly meet that child again when they are all grown up.

My Secret Sister was not an easy book to read, maybe because of our family dynamic.  In the end, there is still longing and heartbreak, but there is also hope and joy.  It was a very interesting and enlightening book!