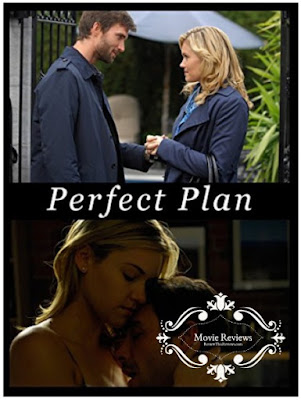 Perfect Plan is not in my normal genre of movies to watch, but surprisingly I liked this thriller mystery movie. It was fairly predictable, but that was mostly because of the written movie description. It revealed too much of the plot in my opinion. When it comes to a mystery movie, I prefer that the "mystery" be left to be discovered when watching, not in the movie description that should be labeled spoiler alert.  Nevertheless, the actors still make the movie worth watching.

Some of you may already be familiar with the actress, Emily Rose.  This was the first movie I have ever seen her star in and it made me look her up to see her other tv films.  I did see several TV films listed that I plan to watch soon.  Frankly, I liked her better than many of the current day major movie actresses in Hollywood.

The movie opens with two campers being murdered one night.  Their identities are not revealed until later in the film when their brother starts searching for them.  Within minutes of the first scenes, we are moved from the Appalachian Trail to Chicago city where we meet Lauren Baker.

Perfect Plan (2010)
Starring Emily Rose & Lucas Bryant Lauren (Emily Rose) is co-owner of In the Loop Realtors.  She and her best friend, Maddie, are struggling to keep the company open in the depressed real estate market.  When Lauren lists a mansion in an exclusive area, they see an opportunity for things to financially turn around for them.

The mansion is owned by a brother and sister who inherited it when their parents died in a car accident.  Since neither of the siblings live there, they want to sell fast.  When Lauren quickly finds a cash buyer, everyone is happy.  At least, they are happy until they see the newspaper article about the bodies of Sean and Rebecca Crawford being found on the Appalachian Trail in PA.


Personally, I thought the movie was pretty good.  I appreciated the plot twists and lack of grotesque murder scenes.  However, this movie is for mature audiences only due to adult scenes and content.

While it may not be an "edge of the seat" thriller mystery, it is well worth watching.


Perfect Plan is available on Amazon and is included for free with Prime Membership.