The Experience of a Lifetime 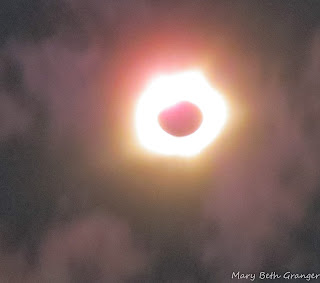 On August 21, 2017, I like many Americans, experienced my first total solar eclipse.  This eclipse which stretched from one coast to the other has been called the Great American Eclipse.  I had read a lot about the eclipse and we had talked about it in my photography club, but I don't think I was really prepared for the awesomeness of the totality.  It really was an experience that cannot be explained in words or even photos.  It needs to be experienced.

Our house was on the edge of the path of totality so after considering my options, I elected not to get a solar filter for my camera but rather to completely experience the few seconds of totality that we would experience.  My friend Susan,  my husband Ray and I gathered on our deck at about 11:45 to experience the eclipse.  The first hour or so went by rather slowly with the moon slowly covering an increasing area of the sun.  Then during the last 15-20 minutes the time went by way too quickly as we watched the sun going from about 3/4 covered, to a sliver, to finally totality.  The sky went darker and darker during this time, the shadows changed, the birds began to chirp and the cicadas became increasingly noisy.  Then totality and we took off our solar glasses and saw the diamond ring around the sun.  Totally AWESOME!!  We could hear cheers go up all around our neighborhood and from a schoolyard down the road.   Everyone was amazed.

During totality I did take one photo with my Canon point and shoot camera which has a 35 times zoom lens. That photo is depicted at the start of this article. It was handheld so it is a bit blurred,. but I wanted one photo that I took, after that I just tried to take in my surroundings.

There will be another total solar eclipse in going through the USA in 2024 and if you can make it I would strongly recommend trying to get to the point of totality.  The partial eclipse is great to see, but seeing totality is definitely the experience of a lifetime!

One of the members of my photography club, Bob Krause takes excellent photos and had a solar filter for his camera.  He got some great shots of the eclipse, taken on his deck in Lake St. Louis, Missouri,  which he said I could share on this post.  Here are 3 phases of the eclipse selected from Bob's photos. 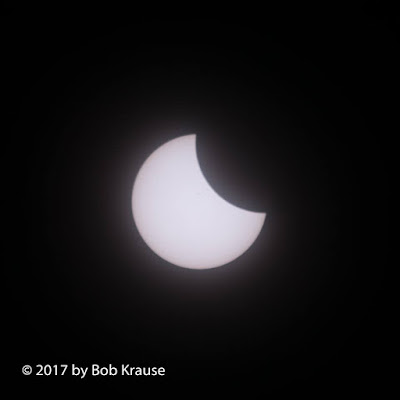 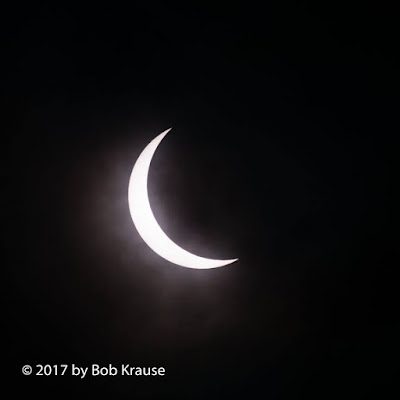 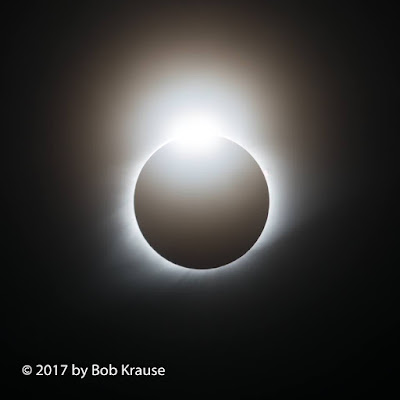 This lively musical starring Bing Crosby features time travel and the predicting of eclipse and is based on Mark Twain's novel of the same name.


Buy a T-Shirt to Commemorate your Eclipse Experience

If you have not already gotten a T-shirt of the eclipse you can still purchase them on Amazon.  Click on the link below to see a wide selection of shirts.