Popsockets - The Smart Phone Accessory You Never Knew You Needed! 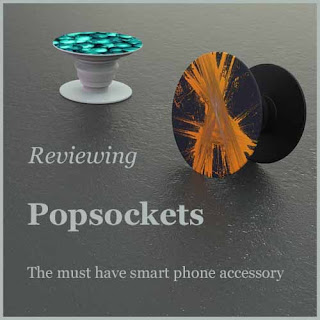 Popsockets are the smart phone accessory that you never knew you needed!  If you have a teen then these are the best gift idea ever - they will love them and you may save yourself some money - sound good?  Read on as I review popsockets for you.

If you're in a hurry jump straight to a selection of popsockets to purchase.

I'll review exactly what popsockets are as well as offering some cool popsockets for sale.  As I'm not sure whether you are new to popsockets or just looking to buy one I've included a list of what's on this page and you're welcome to jump straight to the appropriate section.

What is a Popsocket?

Then she demonstrated it (with it 'popped out') and I realized what a cool idea it was, check out the image below to see how it works 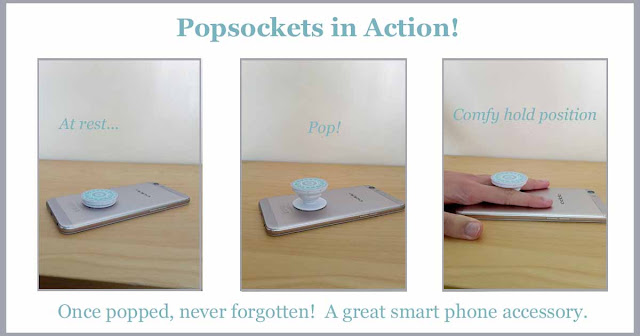 Basically it's a way to hold your phone while you scroll through Facebook, text your mom or snapchat with your friends.  It's a very basic idea which is quite genius - a basic must have accessory for any smart phone.  Even my daughter commented that she didn't know how much she needed it until she had it and I think you'd feel the same way once you got one.

How Do I Save Money With a Popsocket?


Now you're probably thinking okay the popsocket looks great, but you said something about saving money - please explain!

Now I'm not sure how people keep dropping their phones and getting yet another screen cracked, but it seems to happen way too much and as the phones get thinner they seem to slip out of the hand even easier.

There have been several occasions when my daughter has nearly dropped her phone and it has only been saved because the popsocket is between her fingers.   As an aside, I've only had to replace her screen once, whereas some of her friends have had their whole phones replaced due to being dropped on many occasions!

Teens aren't the only ones who drop their phones, we have a friend who if he hasn't lost his phone has damaged it due to it falling more times than he's had hot dinners!   If you're a bit of a butter finger when it comes to your phone then you need to consider a popsocket.

Where to Position Your Popsocket?


So you've taken the plunge and brought yourself a popsocket and you know it sticks to the back of your phone (or phone case), but where?

My daughter spoke about positioning her popsocket with the distain that only a teenager can show because apparently most people put their popsockets in the middle of the phone which is wrong in many cases -although not always.  Confused?

Before you position your popsocket you have to look at how you naturally hold your phone - text, phone, scroll, snap a selfie and just see how you're holding your phone.  My daughter has small hands and a large phone and is usually texting rather than scrolling (she doesn't do social media!) so she has positioned her popsocket a little lower.

If my husband were to have one he would want his to be in the center because he holds his phone very much in the center with one hand while using the other hand to text (and he always puts it on speaker to talk).

For myself I would probably have the popsocket slightly lower than my daughter and a little more to one side as that's where I tend to hold my phone.

So to sum up look at how you're holding your phone to use it before you do add your popsocket and that way you'll know exactly where it will be most comfortable for you.


There are lots of different designs available for the popsocket, as you can see from the photo above my daughter has a blue mandala design, but there are a range of different ones available including plain white or plain black ones and these few here -


Now although I say to put your popsocket on your phone, obviously if you use a case you need to put it on the case.  One of my daughter's friends has the blue nebula popsocket featured above on a case with the same design which really stands out.

It makes me think that you could have a different popsocket for each phone case you have and really make a statement!


My daughter did want a marble popsocket when she first looked at them and by that she didn't mean one made of marble, but rather a design that looked like marble.  Talking to the lady who runs a small phone accessory store at our local mall it appears that the marble popsockets are definitely the most popular ones with the teenage market.

I was thinking of getting one for my daughter's birthday, but when they say marble they forget to tell you how many different ones that encompasses - blood marble, blue marble, white marble, the list just seems to go on and on...


Popsockets - A Great Gift Idea, Not Just For Teens!


Not only are popsockets on every teen's gift list they would also be ideal for a number of other people.  If I didn't use a flip case for my phone I would definitely be rocking a popsocket myself!

Popsockets aren't expensive which means they are perfect as a stocking filler, an office secret Santa gift, a neighbor gift or just as a little thank you for someone.

As I've mentioned these can be stuck on phone cases and/or phones so even if they already have a popsocket they could always have another one because I don't know many people (teens especially) who only have one phone case.

What Do You Think of Popsockets?


I'd love to know your thoughts on this smart phone accessory.