Reviewing the Book, Hide in Time by Anna Faversham 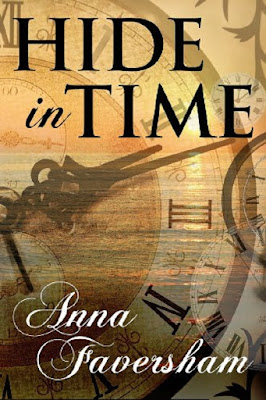 I have just finished reading the book "Hide in Time" by Anna Faversham and I can easily recommend it to anyone.  To be completely honest, I was actually surprised by how much I really liked this book.  I am not a fan of time travel books, mostly because I don't believe time travel is possible.  But, like any really good fiction is apt to do, this book caused me to "suspend reality" and embrace the plot.

Because I don't often read time travel books, the beginning was a little confusing to me, but after the first few pages, I got it!  Once the author smoothly lead me by the hand through a wall that separates the 1800's to the twenty-first century, I was hooked.  I needed to see what would happen to Laura who found herself lost in a world that was 200 years beyond her life.

Because we can study history, I think it would be easier to go back in time, but imagine what it would be like to be cast into the world 200 years into the future.


The Book, Hide in Time by Anna Faversham

Hide in TimeAfter discovering her fiancé had been unfaithful, Laura boarded a ship to America.  She wanted to get as far away from him as possible.  She wanted a new start.  She meant to be traveling to a new world, but she had no way of knowing she would actually be traveling to a different place in time.  She knew she wouldn't know anyone in America, but she didn't expect to be clueless about fashion, jargon, idioms, and a more informal way of living.

The shipwreck she survived changed her life forever.  When she washed up on shore, the land was the familiar, but everything else had changed.  It was to her great fortune, that Matt Redfern, the first person to actually speak to her, was always willing to help the helpless.  Since she had no memory of who she was or where she was from, he helped her get medical attention.  When she still could not "find her past", he helped her establish a new life and guided her in starting her own business.

Five years after Laura was tossed into the future, she had found her footing there.  She was thriving, actually living.  Although she had regrets, she was content.  During the past 5 years, Laura investigated the area of her arrival and discovered the secret of time travel.  She also discovered that she was invisible when she returned to the past and it was clear her future belonged in the future.  Then she met Xandra.

She saw so much of herself in Xandra.  They had so many things in common, even looks.  She felt she had actually found someone who would be a real friend.  Someone who could understand her unique ways and would like her because of them.  Laura hoped Xandra could be the sister she had never had, or at least believed she had never had.   However, when Xandra found herself on a murderer's hit list, she needed a safe haven and Laura had the answer.  She sent Xandra back in time.

As this point the book is divided in chapters where the reader is following two stories.  Laura in the future and Xandra in the past.  A truly fascinating exchange of lives.  It was a very interesting twist to doppelgangers trading places and I really, really liked it a lot.  So much so, I plan to read it again!  I feel like I may have missed some hidden nuggets in the story.


My Recommendation of the Book, "Hide in Time"


When I think about it carefully, I know there were several reasons why I really liked this book and why I would highly recommend it to anyone.

First, it shows us that we can completely change the course of our own lives when needed and find happiness in a new place.  It might take some time to readjust, but we can survive and adapt to new surroundings and people.

Second, it highlights how people are basically the same today as they were hundreds of years ago.   Evil still abounds and good people still exist to maintain the balance that is our world.

And, last but by no means least, I like the concept about time travel in "Hide in Time".  You can't go back!  Once you have crossed into a different place in time, you can't return and just pick up where you left off.  Yes, Laura returns, but she cannot be seen.  She can whisper to the living and they hear her, but they believe she is what most of us would think of as a "ghost".

As I said at the beginning of this article, I don't believe in time travel, but if there were such a thing, it would have to be in a way that everyone traveling in time couldn't constantly be changing the future by visiting the past, literally.

Book Review of "Hide in Time" Written by: