The Marpac DOHM-DS Blocks Out Noise to Help Me Sleep

Do Noises Keep You from Sleeping?


All my life I've had trouble getting to sleep. Recently I solved some of my sleep problems with a better bed and solutions for my knee pain. I finally found natural supplements to help me relax at night and a mask to block the morning light when I need to sleep late in the morning. The last thing that tended to keep me awake were night noises I couldn't control. I wore out my music and rain CD's and although they had helped relax me, they still had contrasting quieter portions in them that did not block out all noise. Ear plugs didn't block out the sounds that disturbed me, either, from snoring to chirping birds. Instead, ear plugs just hurt my ears without making much difference in the noise level. I  finally found a new solution. The Marpac DOHM-DS sound machine blocks out noise to help me sleep through annoying sounds.

Can you relate to any of this? I climb into bed really tired. I've taken my sleeping supplements and calmed my mind. I am finally settled into a comfortable position. As I'm about to drop off into dreamland, the neighbor's dog starts barking, or someone parked practically outside my window on the street gets into his truck, slams the door and then sits there for what seems an eternity letting his loud diesel engine warm up before roaring away.

As I'm just getting settled and about to drop off again, my husband gets up to go to the bathroom and flushes the toilet which makes a series of loud sounds that indicate it's struggling to flush even though it's almost new. I finally manage to get to sleep and when the sun comes up, the windows start making this strange repetitive clicking noise. I think the temperature change makes them expand and contract. It's a  bit like a dripping faucet next to my bed. I could never sleep through it. The sound was too loud for my CD to drown out.


In the past I had tried a cheap white noise machine with nature sounds that sounded really fake and did not relax me. Chirpy birds tell me to wake up, not sleep. I'd rather hear ocean waves breaking without the sea gulls, thanks. I prefer rain without loud claps of thunder. I mentioned in a previous post how my rain CD helped me, but it finally wore out because I had played it all night long for months. As I was searching Amazon with the thought of replacing it, I decided to take another look at the white noise machines.

I discovered that white noise today has progressed a lot. It's like comparing cassette tapes to MP3 music. After reading a lot of reviews, I decided to try a moderately priced compact white noise machine -- the DOHM-DS by Marpac. Simply put, it's a small fan in a round case. You can see it in the introductory photo. That's the one I have used for almost a month now. It takes up a little less room on my dresser than a soup bowl would and it's shorter than a 28-oz can of tomatoes. That is a small footprint even I found room for.

How the DOHM Works 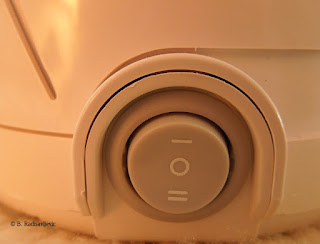 I plug it in, press a button and it's good to go all night long. It sounds like a steady wind that doesn't howl. Those are the controls in the photo. No programming needed. Press the top line for a medium sound. Press the bottom double line for the loudest sound. Press the circle in the center to turn it off. What could be easier.

Since the sound isn't digital, there are no little whirring sounds as there are when a CD is getting ready to replay or shut off. Neither have there been any metallic sounds that ceiling and other fans sometimes can make. I think I may be even able to travel again and actually sleep in the same room with my husband and his CPAP machine in a motel. The DOHM is portable and will work anywhere there's a polarized AC electric outlet. Marpac's DOHM blocks out barking dogs, the annoying window noise, slamming doors, car engines, power tools, and other obnoxious sounds.

It will not block a car alarm going off outside your window, as I found out two nights ago in the middle of the night. It will not completely muffle your husband's voice if he's on the phone on the other side of the wall talking as though the other person is on the moon instead of on the phone. I found that out this morning. It's not likely you will sleep through a smoke alarm going off, either, but that's good, right? I think it would muffle those nerve-wracking chirps when the battery of that same alarm is letting you know it needs to be changed at 2 AM and you don't have a replacement battery in the house.

The sound in the DOHM is somewhat adjustable. Besides the volume,  you can also change the tone of the wind sound by turning the top until you find the sound that's best for your ears. The sound may take a couple of nights to get used to, but after that, you won't notice it much anymore and it will block out the other sounds that have been keeping you awake or making it hard to get back to sleep after a bladder call. In case you're wondering, the fan does not cool the air in your room. Even if you hold your hand about six inches from the unit, you can   barely feel the air moving.


After several weeks with my DOHM now, I would heartily recommend it to others whose sleep is being disturbed or prevented by bothersome noises in an otherwise quiet environment. Are you a day sleeper in a neighborhood where neighbors or their gardeners use loud power equipment? Do you have a baby who is too often awakened by noises you can't control? A garage band next door? The DOHM is a perfect solution.

Amazon offers plenty of choices in white noise machines. I put one I still covet on my wish list, since it still offers me rain and ocean and other nature sounds. It is the Ecotones Sound + Sleep Machine and gets rave reviews. I just can't afford it yet.You can read the reviews and hear what it sounds like if you click the link. Meanwhile, my DOHM blocks out the night noises for me at half the price.

Get your Marpac DOHM at Amazon and enjoy the absence of sleep-interrupting sounds. Sometimes what you don't hear makes all the difference.

If this has been useful to you, why not pass it on to someone who might need it? There are sharing buttons at the end of the post, and the image below is perfect for Pinterest. 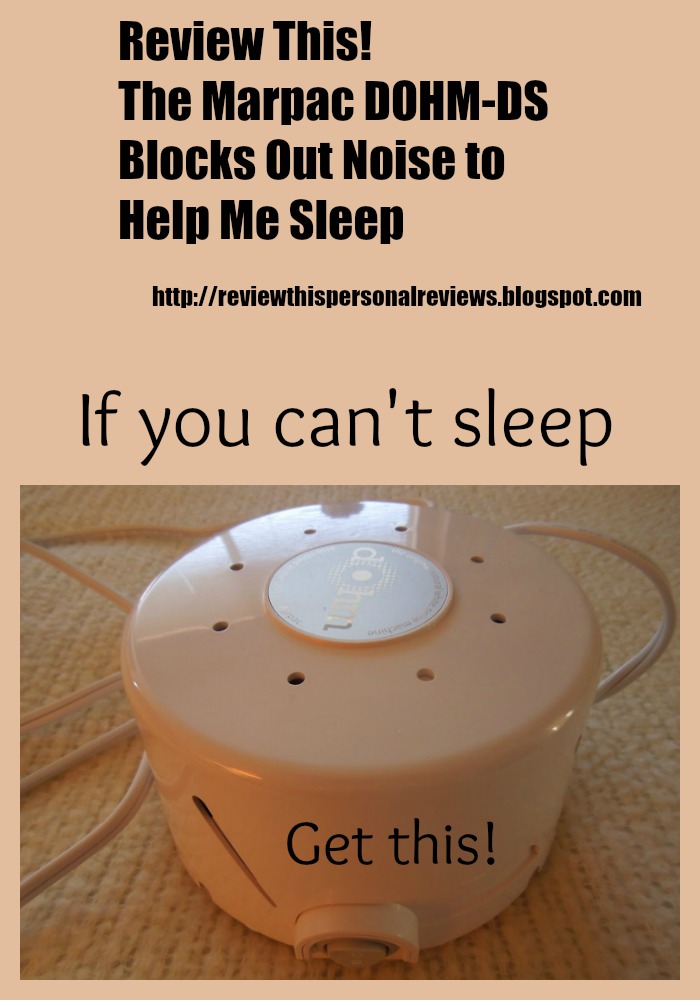