A Review of "The Inn at Ocean's Edge" by Colleen Coble 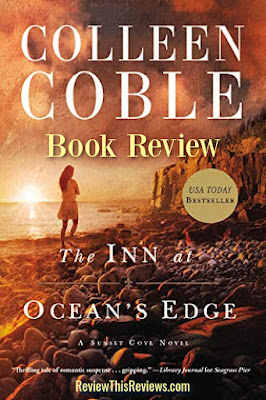 Every once in a while I find a book that is so rare, the plot so unique, that I want to shout to the world, "you must read this book!"  That is the case with the book I literally just finished reading.

I don't normally read mysteries, but this book appeared in my romantic fiction genre.  I didn't even realize I had selected a mystery until I was hooked.  As it turns out, this may well be the best book I have read in years.

Obviously, I could highly recommend "The Inn at Ocean's Edge" by Colleen Coble to anyone who enjoys a romance, a lot of mystery, and a plot that is not at all obvious to the reader.  I literally set on the edge of my seat, stayed up as long as my eyes would stay open, to read this book and find out what really happened to this family, these people, the little girl who was lost in the woods.

The Inn At Ocean's Edge


The plot of the book is so detailed, there is no way I can truly do it justice in a few short paragraphs, but I will try.

The Inn at Ocean's Edge (A Sunset Cove Novel)On her 4th birthday, Claire Dellamare was lost in the woods.  A year later, she was found, but she had no recollection of anything that had happened to her.  It was as if the whole year was completely lost to her.  As she was growing up, she was cherished by her parents who previously thought their daughter was gone to them forever.  Her life was cushioned by great wealth and she was respected for her business acumen within her father's company.  It seemed her life was perfect until she returned to "The Inn at Ocean's Edge".

She didn't think she had ever been there, but she seemed to know things about the place she couldn't possibly know otherwise.  Not very deep into the pages of the book, we find out that this hotel was the setting for her 4th birthday party.  This was the place from which she disappeared.  She didn't even remember that she had disappeared.  She had no idea that her life was so shrouded in mystery, until the residents started talking.

Murders, illness, abduction, lies, and scary nightmares of an unknown man who she witnessed commit murder, all play a part of this most unusual plot.  Once the killer realizes she could actually identify him, he doesn't hesitate to stalk her.  Even with a murderer close on her heels, she is having occasional flashbacks, revelations about her father and his infidelity, as it all culminates to put her, and others, into even greater danger.  So many lies have been told.  So much of the past has been covered up.  She has no idea who she can actually trust.

As Claire searches for the truth, her life, past and present, becomes intertwined with Luke Rocco, whose mother disappeared the same day the little 4 year old went missing.  Unlike Claire, Luke's mother did not return to Folly Shoals, Maine.  He fears she actually never left, especially once bones are found on nearby property.

Apparently "The Inn at Ocean's Edge" is the first of 3 books in the "Sunset Cove Series".  I don't think there is any way Colleen Coble can ever match this book again, but I will definitely be starting the second book in the series tonight.  I can hardly wait to see what she has in store for us in "Mermaid Moon", but most likely by the time you are reading this review, I will have finished that book as well.

It is so very exciting to find a book series that I can barely finish one book before I am downloading the next in the series as fast as my little fingers can sail across the keyboard and push that little purchase button.

Now, I am off!  I only stopped long enough to tell you about this most excellent book.  I know you will want to read it too.

"The Inn at Ocean's Edge" Book Review Written by: