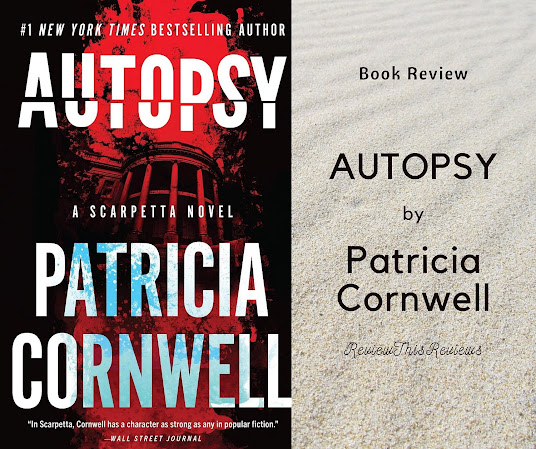 I have been a fan of author Patricia Cornwell for many years. I am particularly fond of her Kay Scarpetta series. The main character, Kay, is a medical examiner/forensic pathologist primarily based in Virginia where the majority of these crime novels take place.
I am a mystery/crime novel fan. I became interested in Cornwell's Scarpetta Novels when the series began in 1990 because at the time I was working for a Medical Examiner. I have followed character Kay Scarpetta, medical examiner, through all 25 books in the series. Book #25 grabbed my attention immediately. Not only was it the latest in the Scarpetta Novel Series, but the title AUTOPSY really appealed to me. You see, I used to type my medical examiner boss's Autopsy Reports! This may not appeal to everyone, but I loved my job and was fascinated with both the pathology and the back-story to each case my boss, County Medical Examiner Dr. D., was involved in. Even the scene investigations were interesting.
*Writer's Note: My M.E. boss even met Author Patricia Cornwell at a medical examiner's convention around the early days of her writing career.

Synopsis of Autopsy by Patricia Cornwell

Two widely different and chilling murders occupy forensic pathologist Dr. Kay Scarpetta as she returns to Virginia to become the Chief Medical Examiner for the Commonwealth of Virginia. Kay and her husband, Benton Wesley, former FBI Profiler and now a forensic psychologist with the U.S. Secret Service, have relocated to Old Town, Alexandria which puts them close to both to the headquarters of the Chief Medical Examiner's Office and to the Pentagon in Washington DC. where Benton works. It is a different post-pandemic world filled with much unrest.
The first case involves a woman's body found shockingly displayed near railroad tracks in a U.S. Park. Eventual identification of the victim brings the trail unnervingly close to Kay's own historic neighborhood. Helping her with the investigation are Pete Marino, former homicide detective who has assisted her on cases for many years, and Lucy, her niece, who is FBI-trained and a whiz on computers.
As the investigation continues, they discover that another young woman was killed in a near-duplicate fashion and found in a similar location. Kay determines that the cases most-likely are connected, even though the first case was signed out as an accidental drowning.
At the same time, a catastrophe occurs in a top secret laboratory in space, endangering at least two scientists aboard. Kay and her husband Benton are called to the White House for a meeting of the classified Doomsday Commission they work with which specializes in sensitive national security cases. As they work remotely with the first potential crime scene in space, an apparent serial killer strikes again very close to home.

Autopsy will keep you on the edge of your seat with the shocking twists and deep tension as these cases reach a conclusion. The forensic details are fascinating to those of us readers who enjoy this type of crime story.
Of Additional Interest... Comet Pictures & Blumhouse have secured the rights to The Scarpetta Series. The books will be adapted to an hour-long TV drama series. The main character, Kay Scarpetta, will be played by Jamie Lee Curtis. Being so familiar with all the Kay Scarpetta stories, I cannot think of a better actress to play the part of the main character. It's perfect, and I look forward to the TV series as much as I look forward to each book in the Scarpetta Novel series.

For more Book Reviews on Review This!,

*Review of the book Autopsy written by Wednesday Elf