Daughters of the Mayflower - Book 2 in the Series 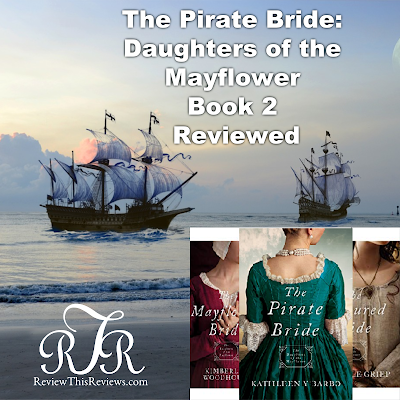 I recently discovered this fabulous historical romance series.  To say it has kept me up into the wee hours of the morning on several nights, would be an understatement.

I like to read at bedtime.  I've found that it normally helps me ease into a restful sleep by taking my mind off real life concerns.  However, in the case of the Daughters of the Mayflower series, these books have been so spellbinding that I can't put them down.  I get wrapped up in the story and must read just one more chapter.  Before I know it, it is 2 am and I am fighting sleep.  I need to know what happens next!

I previously reviewed the first book in this series, The Mayflower Bride.  An excellent story filled with fascinating history.  After I read The Mayflower Bride, I immediately started this book, The Pirate Bride.  Sadly, I finished it in two nights and started the third book in the series the following night.  I'll tell you in advance, I am suffering from sleep deprivation as I write.  At 4 am this morning, I was still reading that 3rd book.  This series really is that captivating.

The Pirate Bride: Daughters of the Mayflower - Book 2Check PriceMaribel Cordoba is only 12 years old when her estranged father appears and informs her that her mother and grandfather are dead.  Therefore, she will be joining him on a ship bound for Havana, immediately.  Antonia Cordoba is a cruel and heartless man.  He doesn't even allow Maribel to stay long enough to attend her mother and grandfather's funerals.

As you might expect for someone so evil, Antonia has enemies who are equipped and strong enough to pursue him.  While at sea, their ship is overtaken by a privateer's ship that is commanded by Captain Jean Beaumont.

A privateer is different than a pirate.  While they both seize cargo and assets, the privateer has a government commission to legally rob a country's enemy ships and divide the proceeds with their government. Therefore, the French Ghost Ship is breaking no law when they attack and board the Spanish Venganza.

On that fateful day, Captain Beaumont is more interested in a passenger then he is in the ship's valuables.  Many years before, Cordoba had killed Beaumont's mother and brother.  It was time for revenge!  After a short struggle onboard between Beaumont and Cordoba, they both fell overboard.  Beaumont had the advantage, but was convicted by the voice of God.  He took hands off of Cordoba and allowed the sea to take her prey naturally.

Back on his own ship, Captain Beaumont discovers that he is now the reluctant guardian of a very opinionated and independent, Maribel Cordoba who is fascinated by pirates. Her intelligence, mental strength and adventurous spirit endears her to the crew of the Ghost Ship.  After a few months together and a life threatening incident, a few of the remaining crew decide it would be best for Maribel if she was raised by nuns in an established orphanage.  While she is still unconscious, they deliver her to Mother Superior on Isle de Santa Maria.

There is so much more to this story!  The characters easily come to life in the pages of this book.  There are quite a few twists & turns that keep you reading.  What would normally be a difficult concept to "sell", the author seamlessly leads the reader to the point where we embrace the idea of this Pirate Bride.

I have read several books by Kathleen Y'Barbo.  She never disappoints.  This is yet another book by this author that I would highly recommend.

The Pirate Bride: Daughters of the Mayflower Book 2 Reviewed by: