Avengers:  Back to the Beginning! 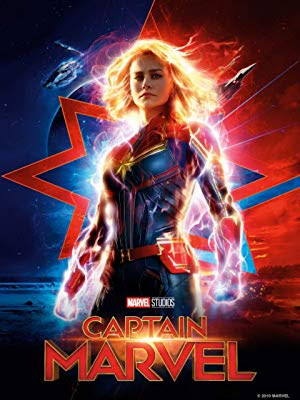 Captain Marvel is finally here!  Stepping back into the past, we are introduced to one of the first superheroes of the Marvel Comics.

In fact, in the movie, the name Avengers was chosen by Nick Fury (Samuel L. Jackson) when he saw Captain Marvel's nickname, Avenger, on the side of her US fighter jet.

After encountering Captain Marvel, Fury decided earth needed to seek out a team of superheroes for protection in the future since wars would be shifting from earthly wars to galactic wars.  It was obvious to Fury that humans wouldn't stand a chance if not better prepared for the inevitable invasions.  Earth wouldn't even recognize the enemy before it was too late.

Marvel Comic purists may not appreciate this adaptation of Captain Marvel, but it certainly plays well with theater audiences.  I heard several loud cheers throughout the movie.  At the end, I overheard multiple comments about how awesome the movie is and how much they really enjoyed this movie.


As a child, Carol Danvers learned by experience that she was going to have to prove herself through endurance, hard work, and by always getting back up to try again when she fails.  Those life lessons served her well as she transitioned from mere human to superhero.

Marvel Studios' Captain Marvel (Plus Bonus Content)Check PriceAs a female Air Force jet pilot in the '90s, Carol was not readily accepted by the male pilots.  She found her place of acceptance and opportunity to excel when she started working with Dr. Wendy Lawson (actually Captain Mar-vell, a Kree rogue agent who sided with earth).  Carol was completely unaware of Dr. Lawson's real identity or race, but she held her in highest esteem.

Dr. Lawson was working with the Tesseract (container of the Space Infinity Stone) to harness it's power for  hyperspace capabilities.  Once it became necessary to make the first hyperspace flight, Carol volunteers to pilot the mission.  Unfortunately, the plane had to be crash landed.  Both Dr. Lawson and Carol survived the landing, but both did not survive the resulting encounter with the Kree, Yon-Rogg.  Carol was infused with the Space Stone's energy when the plane exploded.  She was now a valuable "tool".

Carol was taken into Kree custody, her memory was erased, and she was trained in contact combat by Yon-Rogg.  All seemed well to Vers (Carol's Kree name) until her human life invaded her Kree life, forcing her to find her real identity and place in the universe.

Other Interesting Notes about the Movie, Captain Marvel


It was pretty cool to see a young Nick Fury (Samuel L. Jackson), working as a SHIELD agent.  We even find out how he lost one eye and how he started working with superheroes.

Also, be sure to keep a close eye on Goose, the cat.  He isn't what he appears to be.

Avengers: Endgame Marvel Movie Reviewed
Avengers: Endgame movie has been long awaited, and greatly anticipated by Marvel fans. It does not disappoint. The Avengers: Endgame provides fans with opportunities to laugh, cheer out loud & a few unexpected moments that reduced us to tears. Prepare for more of the unexpected!

Iron Man Marvel Movie Review
The movie Iron Man sets the foundation for all of the following Avengers movies. Every Marvel fan, old or young, needs to see the movie Iron Man.