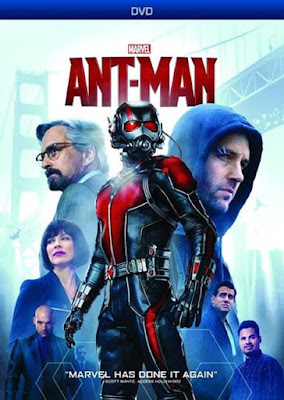 Ready for your next Marvel movie fix?

If you haven't seen Ant-Man, it is definitely one you will want to watch soon.  In true Marvel style, good must conquer evil or the world will suffer.

One of the things I enjoy most about the Marvel movies is that they always choose the right actors to play the superheroes and villains.  Ant-Man is no exception.  Paul Rudd is the perfect actor to play the part of Ant-man.  Plus, Micheal Douglas stars as the extraordinarily intelligent inventor of the Ant-Man suit and shrinking abilities.

This movie also introduces us to the chosen actress to play the part of The Wasp.  Evangeline Lilly is awesome and I definitely look forward to seeing The Ant-Man and The Wasp Marvel Movie that released on July 6, 2018.

Plot of Antman - The Movie

(not the comic version)

Dr. Hank Pym (Michael Douglas) invented the Ant-man and the ability to shrink a man into the size of an ant.  Dr. Pym was in fact the first Ant-Man.  However, seeing how Ant-Man would be exploited and knowing there were others already trying to replicate his technology, Dr. Pym elected to resign, take the Ant-Man suit in order to safely hide it and his technology.

Ant-Man (Plus Bonus Features)The movie fast-tracks to current day where Darren Cross, his former mentee, is too close to replicating Pym's technology.  It is evident to Dr. Pym that it is time to act.  He carefully selects his successor, Scott Lang.  He has been watching Lang for some time, ever since he successfully stole money back from VistaCorp and returned the money to their victims.  Since Lang has a master's degree in electrical engineering as well as a vigilante mentality, Pym believes he will make the perfect Ant-Man.

Dr. Pym and his daughter, Hope, train Scott Lang to work with ants and to become Ant-Man in preparation to "defeat" Darren Cross and his Yellowjacket invention.  The ants in the movie are also incredible!  They make a magnificent team.

This is a MUST SEE BEFORE you go to the theater to watch Ant-Man and The Wasp!