Where to See Photogenic Oak Trees in Paso Robles, California

A Review of Some Notable Oak Trees in Paso Robles


The name Paso Robles literally means Pass of the Oaks when translated from the Spanish. And, of course, Paso Robles was Spanish before it was American. I'm guessing the oak tree population was greater than the human population before the town began. Some oaks are three times higher than the homes and businesses they live beside. Photographing them can be a challenge because of their size alone.

Although you can't walk far in Paso Robles without seeing at least one oak tree, certain areas seem to have some of the oldest or most unique oaks. I'd like to show you where to find them and show you some photos. Some of these oaks are so huge and so surrounded by buildings that it's hard to get far enough away from them to get their entirety in a photo.


The Oak in the Road

It appears when they built Fifth Street,  the city fathers left the oak you see above intact. This tree was measured by Phil Dirkx in May, 2015. At that time he found the trunk was 23 feet around at five feet above the ground. He estimated it was ten feet in diameter. A photo taken in c. 1886  shows a tree that appears even larger than this one at a Paso Robles picnic. So we know these trees have been around a long time.

Here are some other photos of the Tree in the Road.


The photos above  give you an idea of how huge this tree is. Compare it to the cars and the houses. You can also see how the tree has been pruned and trimmed over the years. These photos were taken in the last week of October when both leaves and acorns were dropping onto the street. There is room on both sides of the tree for cars to drive past. Think of the tree as a unique center divider as cars enter this block or leave it.


In the photo  above I aimed the camera straight up to look at the sky through the tree's canopy.

Above you can see every detail in the bark of this old oak. It has been trimmed and pruned as needed through the years. You can see some fresh scars where smaller branches have been removed, as well as older scars where there were once large branches.

When I left to photograph these trees, I expected to also get photos of another tree in the middle of Oak Street between Fourth and Fifth Street that I have often driven around in the past. Sadly, this time there was only a stump. It appears the tree recently was removed.

Show your friends this amazing tree by sending them the postcard below. Just click on the image to get purchase information at Zazzle. 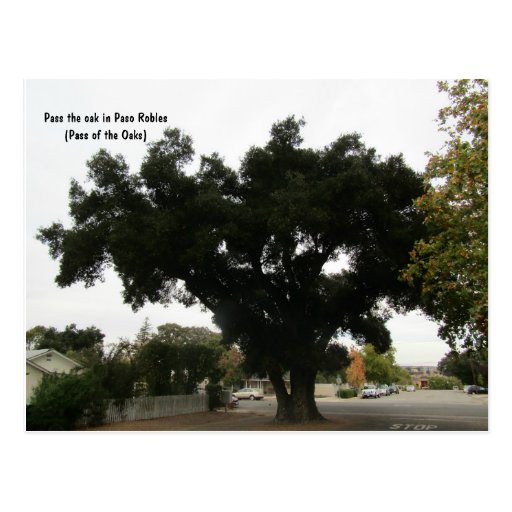 
These photos were taken on 12th Street, one of the main east/west streets downtown. My dentist has an office there in one of the old homes. Both businesses and residences locate on 12th Street. I have focused on the oak trees near residences in these photos. This photo was taken in spring. I couldn't help the fact that it was trash pickup day the day I went walking after my dentist appointment.


The sheer size of the these oak trees makes them hard to fit into one shot because there's no way you can get far enough away from them unless they are on a corner. The house above isn't.  The house below is, but it's still hard to get all those branches into the shot. Some of these oaks seem to have tentacles rather than branches and they seem to reach everywhere as their branches curve.

This photo also presents one of the other problems with getting ideal shots of anything tall or high, such as a sunset. There are wires almost everywhere downtown. It's hard not to capture them because they always seem to be in the way.

We have oak trees right next to some of our most important city government buildings in close proximity to the shopping center of downtown. Here are some of them. I have captured many of them on my Zazzle products. Some of our most beautiful oaks are in the parking lot of the train station. I have photographed the one on Velta Circle many times. You can see some of the best in this blog post: Photos of North County Transport Center Buses.  Here's another of some different oaks in the parking lot.

The tree below is also very close to the train station on Pine Street, though not in its parking lot. Below is the larger view of this unique oak tree. 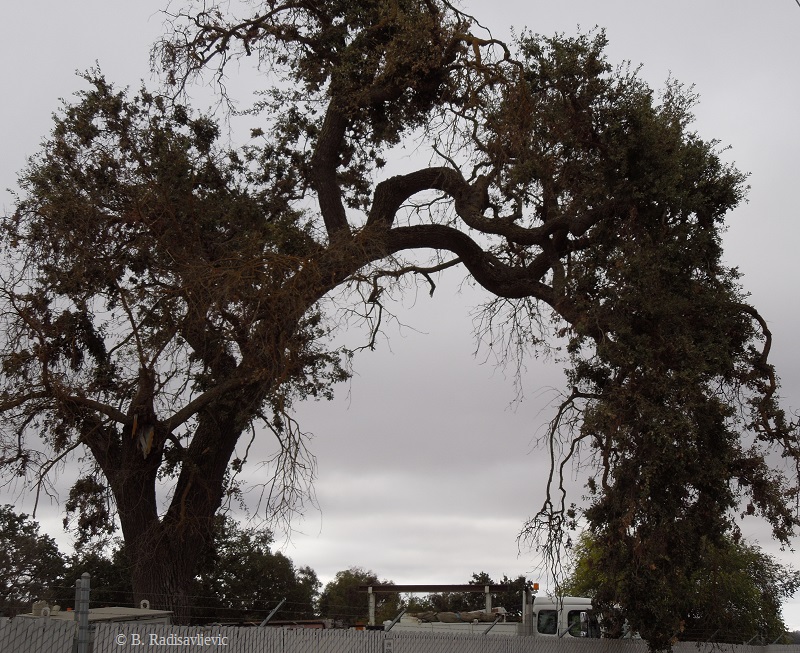 Below you see more of the tree in a smaller size.

The oak below lives next to the Paso Robles Library entrance. You will often see patrons reading in its shade or homeless people napping on the benches. The library building is two stories tall, so that gives you an idea as to the size of the tree.

The Zazzle postcard below shows the courtyard in back of the Superior Courthouse building downtown. Just click on it for more information. You can see it has its share of old oaks. 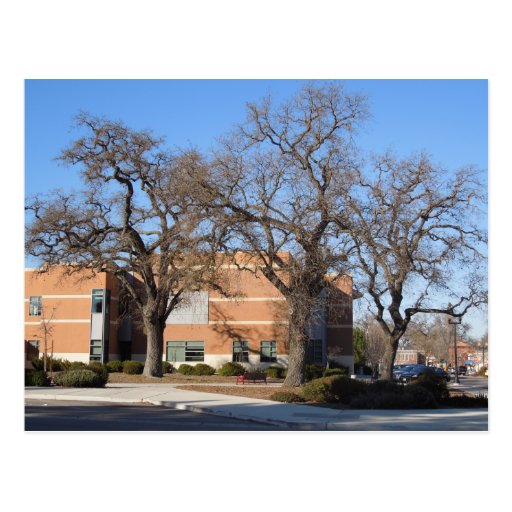 These are in an alley downtown. Sure wish they'd put those wires underground, but they can't afford to.


Oak Lane is a rural street that's right behind the tract where I live. It is full of small farms and amazing oak trees. It is just past the intersection of South River Road and Charolais Road. It runs between South River Road and the property next to the Salinas River. It's a nice walk for those who like to see farm animals of all kinds and some gorgeous oak trees. And oaks aren't the only trees you will see -- just the most impressive. Here's one of them. As you can probably tell, this tree was taken in winter. That's my favorite season for photographing deciduous oaks. I like seeing their "bare bones."


Linne Road is accessed from Sherwood Road in Paso Robles and twists a bit before continuing east toward Sculpterra Winery and other farms and vineyards. It is worth the short drive from the city for those who love oak trees. I have featured some of my photos of a damaged oak on Linne, what I call a tree with character, in this post, Looking at Deciduous Oaks in Winter. Here I will just show you one shot I took on this country road. The oak tree itself is so huge I can't get it all into the shot. It was this owl metal sculpture that made me notice it first. 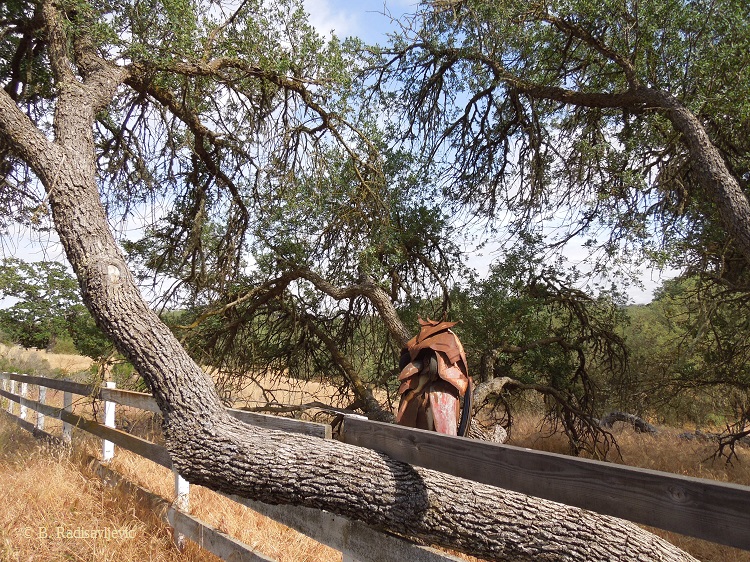 You can see the tree has already done a number on the fence. I guess the owl is keeping an eye on it. The tree extends far behind and next to the owl on the other side. Even the eye can hardly see the entire tree at once.

I did notice another oak not far from this one. It was just outside one of the farms. It appeared to be hollow. So I looked inside.


The Tree That Lives Across the Street


I hope you've enjoyed this brief tour of some of Paso Robles' most  interesting old oaks. I never get tired of discovering and photographing new ones. Of course my favorite is the one that lives across the street from me. I like to photograph it best at sunset. This was taken in winter.