A Shelter of Hope by Tracie Peterson - Book Reviewed 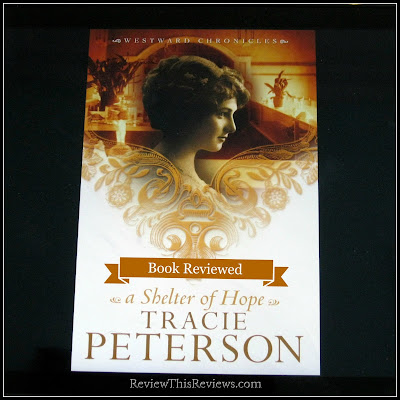 There are times in everyone's life when we need a shelter and our home is most often our shelter.  However, in the book A Shelter of Hope, Simone needs a shelter from her home.  She endures regular beatings at her father's hands.  Since she had never known any other environment other than her horrendous home, she doesn't know where or how to find a shelter from the evil. When her mother tried to escape to get help, she was tracked down and murdered.  This knowledge completely trapped Simone.  She knew if she tried to run, she would also be murdered.

The book, A Shelter of Hope, was written by one of my favorite authors.  I doubt I would have stuck with the book beyond the first chapter if I didn't trust the author, Tracie Peterson, to deliver her child character.  A Shelter of Hope is a historical fiction set in the late 1800's in the backwoods, mountain country of Wyoming.  Because of the time period and seclusion of the family, it is easy to believe the horrific details of the book could actually take place.


Synopsis of "A Shelter of Hope"


A Shelter of Hope (Westward Chronicles, Book 1)Simone Dumas had no hope of ever being rescued from her father's abuse.  Her mother was murdered when Simone was only ten and Simone felt abandoned by her mother, by love itself.  There were few women around and those women were just as powerless as Simone.  The men in the town only leered with lust at the now seventeen year old Simone.  She knew there was no one who was willing to help her escape the monster.  However, even Simone didn't know how very low that man, her father, was capable of going until he sold her, along with their home and property, to a stranger in town.

Louis Dumas had decided it was time for him to unburden himself.  There were no longer many animals to trap in the area.  Supporting himself, his daughter, Simone, and their home was simply too hard for him now.  He wanted to go where he could take a new wife and earn an easier living.  He certainly wasn't beyond stealing that living either.  When Garvey Davis showed up in town with a lot of money, Louis saw his opportunity to rid himself of everything all at once.  He sold Davis his home, his property and his daughter.  Dumas assured Davis that Simone was a hard worker and would make a wonderful wife for him.  Louis took Davis out to his home, introduced Simone to Garvey and announced that he was leaving.  He told Simone that she had been sold to Garvey along with the rest of his property and would not be going with him.  Simone knew she had once again been abandoned by a parent.

When Davis tried to force his husband rights, Simone grabbed a nearby water pitcher and hit him in the head.  While Davis was unconscious, perhaps dead, Simone quickly gathered her few things, stole his horse and started riding away from the only home she had ever known.

She rode for weeks until she arrived in Laramie where she saw a train for the first time in her life.  When she discovered it could take her a lot further away, a lot faster, she sold Davis' horse and bought a ticket to Chicago.  Once in Chicago, she realized she needed a paying job.  After all, she needed a place to live, food to eat and clothes to wear.  She came across an employment ad to become a Harvey girl in the Harvey chain of restaurants along the railroad line.  She took a bath, bought a new outfit and went for an interview where she realized a name change would be necessary.  Jeffrey O'Donnell hired Simone "Irving" immediately without doing the normal background investigation.  She looked nice and he needed servers for the Harvey House immediately.  She left with him the next morning on a train bound for Topeka, Kansas and training to become a Harvey girl.

Back in Wyoming, Louis Dumas realized he had sold Simone way too cheap.  After all, he could have sold her many times over if he had only kept her.  He decided she could be his goldmine.  All he needed to do was take Simone back from Davis.

When Davis' body is found in the old Dumas home, Deputy Sheriff, Zack Matthews, embarks on a mission to hunt down Simone Dumas who he believed either murdered, or played a part in murdering, Garvey Davis.

Simone knows she is running for her life, but she doesn't realize that she is being chased by her own father and the law.

Please do not think I have given away the entire story in this review.  Because there are so many developed characters, and so much happens in the first part, it was necessary to give more of the plot background in this review then I would normally write.  I assure you, there is a lot more to this book, including a love story.  A Shelter of Hope is quite detailed as it walks us through Simone's troubled life as she, herself, finds a shelter of hope in the Harvey House.

The book also gives us a inside look at the struggle of the young woman to ever trust anyone, including God.


A Shelter of Hope Book Review Written by: