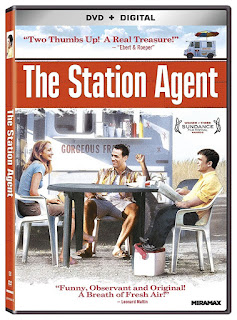 Do you prefer movies in which the actors melt away and leave behind a story and lives that you remember for years to come? That is exactly how I feel every time I watch The Station Agent.  I feel as though I've visited this little town and spent a summer day with this group of people. Whether you are a collector of movies, someone who feels socially inept, or both, this movie is one that you are likely to watch more than once.


The movie opens with Fin working with his friend, Henry. It is clear that the two are friends, have operated in a familiar way for a long period of time, and both love trains.  Henry dies immediately and this thrusts Fin into the world without a job, without his only friend, and into new territory.

Fin learns that Henry had bequeathed him some property - about a half acre and an old, abandoned train depot. The attorney asks if Fin has even been to the area. Fin tells him that he hasn't. The attorney responds, "I drove through it once, let me tell you, it's pretty, but there's nothing out there. Nothin' ".  Along with Fin we learn that there is quite a bit more than "nothing" waiting for Fin in Newfoundland.

Three weeks after Henry's death, Fin moves to the train station. We have already come to understand that he is a man of few words and fewer relationships. He is a dwarf and as a result of the stares, the comments, and the impulsive picture-taking as though he's a spectacle instead of a human, he has tried over and over to just be "left alone". However, as soon as he opens his door, after his first night at the train station, he meets Joe.  Roger Ebert referred to Joe as "an eruption of energy". There is no better description for Joe.

Joe is as open, sharing, and high energy as Fin is closed, quiet, and guarded. It is Joe's nature to join others and to live in the moment. Fin makes it clear over and over that he prefers being alone. But Joe persists, because, well, that is just who Joe is and what he does.

Almost immediately, Olivia barges onto the scene.  She is as kind as she is heart-broken. She is a walking shell of a person and my heart breaks for her. During her first real conversation with Fin she asks, "Would you mind not looking at me right now?" As different as they are from each other, they both wish to be invisible.

The three characters experience ups and downs, jokes, and heart break, as they begin to become friends who finally depend on each other. Fin is the hero, Olivia is broken, and Joe is the big kid in the man's body who joins them together. What I thought would happen never did. And what ended up happening - after I cried - was even better than I expected.

This simple movie is full of sadness, friendship, and real life. The neighbor girl was as genuine and real as the librarian, corner store clerk, and the jerk in the pickup truck. The Station Agent is not your typical movie in which the flawed male meets the depressed female, everyone has sex, and all problems are solved. This simple film is beautifully acted and as genuine as a movie can be. A movie in which lives intersect and people come to really know each other. And in doing so, they turn out to be the best part of us.