Book Review of Twilight in America by Martin Mawyer 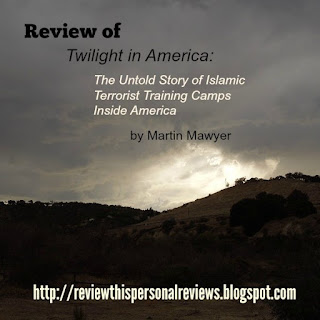 My curiosity led me to read this book about terrorist training camps in America and my concern made me write this book review of Twilight in America by Martin Mawyer.

I wanted to know the truth about claims that some Americans in rural areas may have Islamic Terrorists living very close to them, training for jihad. It seemed very far out to me. After all, it would seem that if people were actively training for guerrilla warfare in America, learning to make bombs, storing and shooting assault weapons, and putting armed guards at their compound entrances, the FBI would put a stop to it.

Twilight in America: The Untold Story of Islamic Terrorist Training Camps Inside America is author Martin Mawyer's attempt to show Americans what is going on right under the noses of local  police and the FBI, neither of which appears to want to get involved. The introduction opens with the kidnapping and beheading of Wall Street Journal Reporter Daniel Pearl in 2002. It seems Pearl was trying to get information about the shoe bomber, Richard Reed, who was said to have visited the jihadi cleric Mubarik Ali Shad Gilani in Pakistan just prior to his attempt to bomb a flight from Paris to Miami.

Later in 2002, the Beltway snipers began a 23-day killing spree in the Washington, D. C. area. John Allen Muhammad, the elder of the two snipers, had intended to wage jihad against Americans by kidnapping and brainwashing young American boys so that he could train them to kill Americans for Allah. Mawyer learned that the Beltway snipers had connections to Jamaat Al Fuqra, a terrorist group founded by Mubarik Ali Shad Gilani. Also see "The Beltway Snipers' Motives" by Daniel Pipes. To  imagine what this must have been like for residents of the Washington, D.C. areas during the attacks, watch this documentary. It's long, but if you are a true crime fan, it will hold your interest.

Gilani is also the leader of the group Muslims of the Americas (MOA).  MOA owns a Muslim compound of 200 in Red House in Charlotte  County, Virginia, which is believed to have hidden the Beltway snipers. Is your head swimming yet? I haven't even gotten past the introduction to the book in the review so far. There is another article online, Jamaat ul-Fuqra in Virginia, Part 1 that even links to a map of a compound close to this and this article documents much of what I mention below.

Twilight in America: The Untold Story of Islamic Terrorist Training Camps Inside America
Chapter 1 leads us to Arizona and Colorado, where an alert owner of a storage locker company notified police of suspicious activity related to a locker on which the rent had not been paid for two months. He had heard of robberies in the area and thought maybe his locker might have been used to hide stolen goods. When police and FBI investigated, they found instead weapons and evidence of terrorist attacks already committed and plans for more to be carried out. One of these was a plan to kill the "infidel" Muslim cleric Rashad Khalifa, who had turned his Tucson home into a Muslim mosque.

After the plot was uncovered, police officers went to Khalifa to warn him of the planned attack, which had been written out in great detail on four pages. The cleric admitted he had gotten death threats from Colorado. About two weeks after the police had warned him, Khalifa was murdered in exactly the way he was warned it would happen.

This is shocking enough. What is even more shocking to me, though, is that the same storage locker that contained the murder plans and weapons also contained evidence that we, the American people, are being bilked by these terrorists taking advantage of our welfare system and using programs meant to benefit the poor to finance terror. They also used identity theft, insurance and other fraud to launder money to support their terror training activities here and to send money overseas to Gilani in Pakistan. These fraudulent activities cost American businesses and taxpayers billions of dollars every year.

Meanwhile, back in the compounds, in some of which live four generations of Muslim families in poverty, people in a position to know have stated that abuse of Muslim women and children is rampant.  Some have been in these camps all their lives, getting all their education in the camps. An informant for the New York Police lived in one camp where he saw children beaten with sticks and women tied to trees and hit with sticks or lashed for not obeying commands of Gilani or for trying to leave.

This review just scratches the surface of the information that is included. It is well-documented. Pages 259 - 285 consist of just appendices and footnotes. The camps are not touched by the authorities, who say they have to respect the inhabitants' First Amendment rights. They can only act after a crime has been committed. Those running the compounds send those who are about to commit crimes outside the compounds to live in apartments in a city before they commit the crimes, so that if the police are looking for them,  they won't be in the compounds and the leaders can say they were sent away because they were criminals.

In Twilight in America, Mawyer has researched the connections between Jamaat Al Fuqra, MOA, the Muslim Brotherhood, and acts of crime and terrorism in the United States. He believes these compounds are training terrorists on American soil by recruiting in American prisons and moving these prisoners to the compounds after release to "rehabilitate" them. There are 21 known camps, compounds, villages, and communes spread throughout the United States, mostly concentrated on the east and west coasts. There are similar compounds in Canada.

I know this all sounds impossible. That's what I thought, too. Before you dismiss it, though, read the book and examine the documentation for yourself. Even if you decide not to believe what you read, it's still a fast-moving story that could very well fit into the true crime category. Get the book, and decide for yourself. You also might want to get one or both of the DVD's by the author listed below -- especially if you live in Europe.

Europe's Last Stand: America's Final Warning, Part 1
North America is not the only place that needs to worry about Jihadist activity on its soil. This set of documentary DVD's on the rise of Islam in Western Europe reveals the Five Pillars of Islamic Conquest: Infiltration. Imams. Isolation. Islamization. Implosion. This DVD,        Part One, focuses primarily on Infiltration, Imams and Isolation. The documentary took four years to make and required investigations in over a dozen European countries. Information cannot hurt us. We can examine it and decide ourselves whether it is accurate or just alarmist. Lack of information can hurt us.