My Nose Has Always Been in a Book

I Began to Read at an Early Age

My parents say I taught myself to read when I was three years old, and I still remember the exact book that helped me learn – I See a Kitty. It had large print, few words, several full-page photos of a kitten doing interesting things, and a very uncomplicated plot. My mother read it to me until I had it memorized, and I would still be able recite it to you if you could stand it. Memorized or not, though, I was able to recognize those words in other books my mom read, and I'd ask my dad about the letters in the headlines of the paper he was reading. By the time I hit first grade, the teacher didn't know what to do with me. I and another girl in my class who coincidentally had the same first and last name as I, got to sit in a corner of the classroom and read books while the teacher taught the rest of the class to read.

Since those days I've continued to love kitties and books. I currently don't own a cat, but I own way too many books. I've been collecting them all my life. My first job after high school was in a library. My major in college was English. I taught English at the high school level for two years after that. I quit with the hope of starting a family, but that didn't happen, so I started working in a Christian bookstore. At both the library, where I could check out all the books my heart desired, and at the bookstore, where I could borrow all the books I wanted to read, I had access to as many books as I needed. My bookstore discount helped me stock my home library. Is it any wonder they have made me the Book Contributor here on Review This?

Living with Books and Selling Them

My book collecting didn't end there, though. As a teacher and later, a homeschooling mom after we adopted our two children, I continued to buy and read books. After our daughter moved out and our son was killed in a jet ski accident, I made a hasty decision to become a home school book vendor. That meant I exhibited my books at conventions all over the country between 1992 and 1996, as Barb's People Builders. We had to stop the exhibiting and California book fairs at private schools after that because my husband had worn out both hips. So I took the business online.

I decided it was time to retire from e-commerce at the end of May 2015 because several surgeries in 2014 made me deactivate my site while I recovered and the site itself became obsolete as far as Google was concerned. I was also not physically able any longer to ship large purchase orders. So after twenty years of selling inventory, I just stopped. I still love books, but now I am a real life book contributor. I'm donating as much inventory as I can to worthy nonprofit organizations. I'm concentrating more now on writing and building more web sites.

I now have more time to read and review books. I have started converting my Barb's People Builders website into a review and affiliate selling site, Books to Remember  so that I can promote the books I love whether I own them or not, though I still do own most of them. Most of the books I review there are for children or educators. I review most books for adults here on Review This! or at Bookworm Buffet, one of my own sites.

I Finally Discovered a Way to Share My Writing 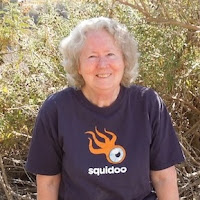 I have been writing since I was a child, but at first I only shared it with family and friends, mostly in long letters. I was still selling books when I discovered Squidoo became a lensmaster in 2009. By the end of that year I had become a Giant Squid, and still wear my Squidoo T-shirts I was given when I became a Giant Squid. In fact, I'm wearing one right now. Unfortunately, Squidoo died in 2014, but I had already begun writing for other sites and starting my own blogs. Much of what I wrote for Squidoo has been transferred to a new HubPages account.

Here are the other places you can find me on the internet.

Of course, there's more to life than reading and writing. I have a garden or two, and I concentrate on herbs and drought-resistant plants. I enjoy keeping up with my local art scene, and I love to take pictures of all our local scenery and activities. When I have time I like to cook and bake. I just don't have time very much anymore.


Cicero - If you have a garden and library.. Postcard

Not too many books, Not enough shelves! Buttons