Review: How to Get Rid of Annoying Crawling Insects Like Ants without Poisons


Is there any worse way to start the day that walking into a kitchen that's been invaded by ants? I realize a medical emergency or a house on fire could be worse, but it's still a real downer to go into the kitchen to fix breakfast and find the counter full of ants. 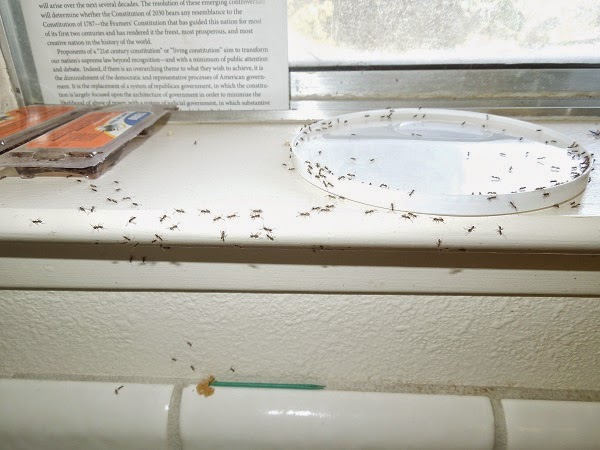 That’s what happened to me again this morning. I had them pretty well cleared out and hadn't been bothered for about two weeks, but today they had found another way in I did not have guarded. Fortunately, this time I knew what to do. I was prepared. The ants you see above I was trying to kill with poison -- store-bought and a homemade version of the same thing. That was back in September of last year.

About three months ago, after invasion after invasion, I had purchased two five-pound bags of Food Grade Diatomaceous Earth. I had tried making my own ant poison using Borax from recipes I found online. The ants loved it. They loved it so much they told all their buddies about it and I had more ants than ever. I guess there were so many ants in their hills that they didn't all die off when it was brought back. I read that the liquid bait wasn't as effective at killing the whole colony, so I mixed the recipe for dry poison. It might have worked had the ants been attracted to it, but they totally ignored it.


It was in desperation that I tried food grade Diatomaceous Earth (DE). I used one of those little cups that had formerly held a small size yogurt to sprinkle the DE where needed. I put it where I saw the ants entering and I made borders around the areas where they were as best I could. I lined the edges of the kitchen sinks with it. Then I went away. Within 24 hours, most ants were gone or dead. I'm not sure what happened to the bodies of most of them. As more ants tried to come, they were stopped at the entrance places. Within a few days they had stopped coming. I hadn't had them for about three weeks when I went to bed last night.


This morning they decided to come up from the bottom instead of where I had them blocked at the windows. The counter was covered with them and the sink was full. I had been too tired to empty the dishwasher last night and the dirty dishes had been left on the counter and in the sink. I moved all dishes into the sink and spread my magic powder on the floor where the ants were coming in and put a border back on the counter and around the sink. I now apply the DE with an art paintbrush – a medium width one. It's large enough to spread my borders and also to brush ants that are outside the borders back inside them. Professional dusters are available, and might do a better job of spreading, but I decided to do the best I could with what I had on hand.

If an ant walks on the DE, it will die. It will puncture their stomachs and they will lose their body fluids. However, the food grade DE is so safe that humans can eat it and it won't hurt them. In fact some people use it to treat constipation instead of using a laxative.

In the reviews on Amazon, people have reported great results using DE on bedbugs and fleas. Since it is non-toxic, it won't hurt pets or children. It will work with any crawling or flying insect. But it has to be dry to work. If it gets wet it is no longer effective, so it doesn't do much good for snails, slugs, or other bugs outdoors where you water. I don't dust any outdoor plants where a bee or butterfly might land, though I might try it on my chard that has no flowers.
I hate using any kind of poison in the kitchen or anywhere else in the house unless there is no other solution. DE won't be carried back to kill off a colony, but the ants in your house won't be returning to their colony to show their pals the way to your kitchen, either. They die quickly and don't go anywhere.

The picture above was taken in an invaded bathroom, I had left a measuring cup that had been full of homemade liquid ant bait with a Borax base. It finally dried up. The ants had loved it. A few days ago the ants found a way through my DE barrier and headed right for the cup, even though the bait had dried up long ago. So I sprinkled DE into the cup. You can see the result in the dead ants at the surface. It was the DE that killed them. Had it been the poison they would have taken it home.

There is a downside, but I can live with it. You have to keep the DE on your counters and floors until the infestation is gone. It doesn’t look nice, but it won't hurt you. Only food grade DE, not the stuff used for swimming pools, is harmless to pets and humans. So be sure to get food grade.

I have focused on ants here because I don't have pets, so no fleas. I don't have bedbugs, either, thank goodness. Ants are my biggest problem. But if you have fleas in your house or bedbugs, you might want to try it to get rid of them, too. To get your supply, just click below. I had a tough time finding food grade locally. Why not get yours today so it's on hand the minute an invasion begins.