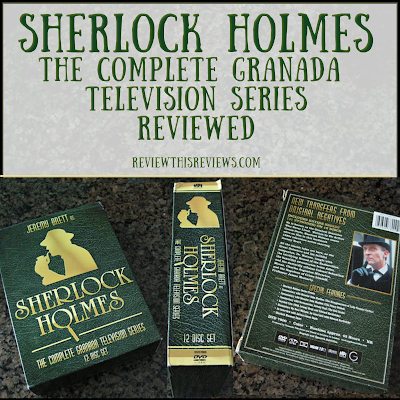 In my opinion, Jeremy Brett makes the best Sherlock Holmes in any Sherlock movie or series.  This complete DVD series collection is totally awesome!  Now, we can watch, or re-watch, any individual Sherlock Holmes episode whenever we wish.

Our son gave his father Sherlock Holmes: The Complete Granada Television Series set of DVD's for Father's Day.  He knew this would be the perfect gift for his dad, who originally had the shows on VHS.  The tapes are getting old, plus the DVD collection is much easier to store and watch on a variety of devices including his laptop. What we have discovered though, is that some of the TV series episodes were missing from the tapes, but are included in this DVD collection.  How wonderful it has been to rediscover the missing episodes.

In addition to giving his dad the DVD collection, our son has spent hours watching the shows with us. We all love Sherlock Holmes, therefore it makes the perfect TV series for us to watch together.

In addition to well known episodes like "The Hound of the Baskervilles" or "The Red Headed League", this 12 disc DVD set includes:
Sherlock Holmes: The Complete Granada Television SeriesCheck Price

That is 43 hours of excellent television shows that are quite intriguing and entertaining.


As I said in the introduction, Jeremy Brett is my favorite actor that ever played Sherlock Holmes.  His overall looks, facial expressions, his voice inflections, as well as his athleticism are perfect for the Sherlock character.

In one episode, he easily jumps over and clears a couch.  In other episodes, he is seen stealthily walking up on someone.  He is also masterful in fisticuffs.  It is difficult to believe the same man who can vault over a couch, could also walk so silently, or engage in a physical fight, but Jeremy Brett pulls off each of those feats effortlessly.  He makes the fictional Sherlock Holmes character believable.

Whilst Sherlock Holmes is also a mental genius, Jeremy Brett is an acting genius!