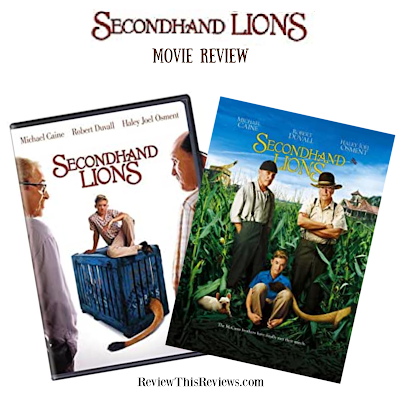 Secondhand Lions starring Michael Caine, Robert Duvall, and Haley Joel Osment is a fantastic movie! It was released in 2003, but is well worth watching now.

Each week, I take a little time to visit my parents.  We select a movie to watch together, eat snacks, and enjoy our time together.  This past week, Mom selected the movie.  She wanted to watch one of her all-time favorites.  While I remembered the name of the movie, I did not remember much about the story line.  After watching it again, that is pretty surprising.  Secondhand Lions is a fabulous movie!

If you haven't seen it before, or if it has been a long time since you watched Secondhand Lions, I highly recommend seeing it now.  It is totally appropriate for mixed company of all ages.  I doubt it would be entertaining for young children, but I can't think of a single thing offensive in the movie, although it is rated PG.  I'm sure it got that rating for some reason.


Secondhand LionsCheck PriceThe introduction of the movie starts with two old men having a blast flying a bi-plane around the countryside, through and into places not meant for planes.  This is the first, but not the last, moment of laughter for us.

The story begins with 14 year old Walter Caldwell (Haley Joel Osment) riding in the car with his mother, Mae (Kyra Sedgwick).  They are on their way to Mae's uncles home in Texas where she plans to leaves Walter for a few months while she attends court stenographer school.  Even at his young age, Walter is immediately skeptical of her plans.  Apparently attending court stenographer school is another questionable idea in a long line of bad ideas and decisions by Mae.

Walter isn't very happy with this decision.  He doesn't know his great-uncles, Hub (Robert Duvall) and Garth (Michael Caine).  Until this trip, he has never even heard of them.  Mae explains that they had "disappeared" for many years, but have turned back up in Texas, believed to be quite wealthy.  Driving up to their home, the place doesn't look like it is owned by anyone wealthy, or welcoming.

Staying with his uncles, hearing their fantastical stories of adventure, bravery and extraordinary travels, plus watching the way they behave, Walter doesn't quite know what to make of Hub & Garth.  They seem to live by their own rules and don't care one bit what others think of them.  They even have a real lion brought in for a lion hunt.  Turns out the lion is not up for the chase, but that is as much about the lion as I am going to say. I wouldn't want to ruin the lion fun for you.

By the time Walter's mother returns to pick him up, Walter loves his eccentric uncles and he can clearly see the truth about many things.


Secondhand Lions is a movie that will make you laugh often, perhaps cry a bit, and leave you feeling good.  This is a must-see movie!  Even if you have seen it before.