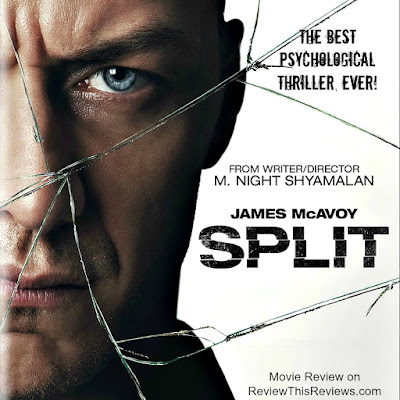 I want to start by saying that reviewing Split was not an easy task.  This movie is so physiologically deep that I worried I would not be able to capture the intensity with mere words. I was also concerned that I might unintentionally dissuade readers from watching the film by telling too much.  It really does need to be watched in order of events, instead of reading any brief synopsis that delves into the plot.

James McAvoy does such an excellent job of playing the part of Kevin Wendell Crumb, I know, without a doubt, I would be frightened to be in his real life presence.  I liken his acting job in this movie to that of Anthony Hopkins as Hannibal Lecter.  For years after I first saw that movie, Anthony Hopkins was the face of evil in my mind.  Therefore, for me to compare the two, is truly the greatest compliment I could give to James McAvoy.

The title and DVD cover warn you in advance that the movie will be a terrorizing tale of a man with a split personality.  But, the film is so much more than just a story.  It gives you a close-up look at how the individual with DID (dissociative identity disorder) is tortured by his own mind.  So many times throughout this film, I felt sorry for Kevin, but I felt more than sorry for his victims. 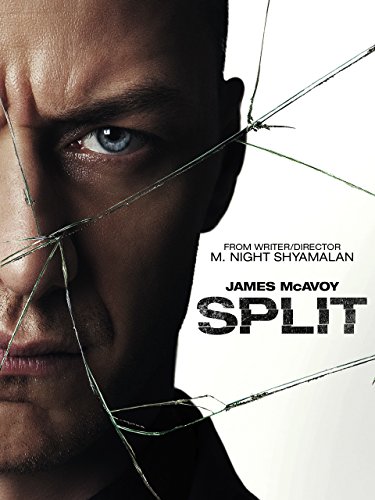 SPLIT ~ Movie by M. Night ShyamalanCheck PriceThis is the best psychological thriller that I have ever watched.  Almost every emotion a person could feel is toyed with in this movie as we helplessly watch the spellbinding, terrifying events.

Kevin Crumb has worked hard to lead a normal life and to control the disorder that plagues his life.  He doesn't try to deny his mental difficulties that are the result of the torture he survived as a child.  It is clear when "Kevin" or "Barry" is in control, that he is desperate to be good, loved, and accepted.

Dr. Fletcher has been Kevin Crumb's therapist for years. She has been able to help him with his DID by identifying 23 distinct personalities.  Up until recently, he has been leading a productive life, holding down a good job for years, and coming in for his weekly therapy sessions. She is very proud of him, but becomes greatly concerned when he starts sending her emails at night.  She schedules emergency appointments with him, but one of his dominant personalities shows up for the appointment and assures her all is well.


If you know you can handle a tough psychological thriller, you will definitely want to see this movie.  If you have a strong interest in psychology and enjoy delving into the inner depths of DID, then this movie is for you.  However, if you are prone to nightmares after watching an intense movie, I wouldn't recommend it.

As for me, I had no trouble sleeping after watching the movie, but I can understand how it might frighten some.

Also Reviewed on Review This Reviews!

Unbreakable is an exceptional thriller movie & the beginning of a great series. M. Night Shyamalan is a master of suspense and unexpected twists.

The Movie "Glass" is full of unexpected events that lead up to a shocking ending. A must see for Shyamalan fans, even if you don't like realistic endings.