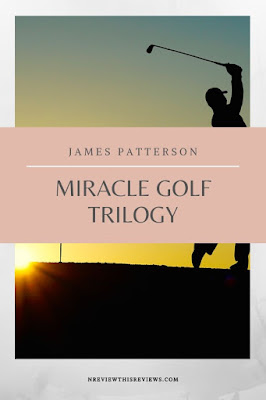 American author James Patterson has written almost 50 books in his best-selling writing career, many in series starring continuing characters who have become favorites of readers everywhere.

About a dozen years ago I picked up a small, quick-read book about a character who liked to play golf. I can't really say why I chose this book because I am not a golfer; in fact, have never even been on a golf course in my life.  But I like most of James Patterson's books and this was one I had not read. And I have golfers in my family and once lived in Augusta, Georgia (home of the Masters Golf Tournament), so a golf story wasn't that far away from the subjects I usually read.

The book was “Miracle on the 17th Green”. Reading it, I became absolutely entranced, liking the story and the character (Travis McKinley) very much. It is a 'feel-good' type of story that leaves you with a sense of wonder.

Shortly after finishing the book, my brother-in-law was visiting our home. George is about as close as you can come to a non-reader ~ someone who seldom reads anything more than an occasional magazine. But he is a golfer, so I gave him this book to read, thinking he might enjoy it.  Well, he couldn't stop reading and finished the book in a single afternoon. Even if you don't enjoy reading books, this one will capture your attention and give you pleasure.

The feeling that book gave me stayed with me over the years and I was delighted to discover that James Patterson went on to write two more books in the 'Miracle' golf series.  I have now read all three and the synopses of this trilogy follow:


Miracle on the 17th Green


Travis McKinley is a middle-aged man whose life has reached a strange point. His job is about to be down-sized, leaving him out of work, plus he has been feeling an uncomfortable and distant disconnect with his wife and children.

On Christmas Day Travis decides to play a round of golf while he thinks about the direction of his life. Something amazing happens that day on the course. He suddenly finds himself “in the zone”, playing like a pro for the first time ever. This becomes the beginning of an incredible adventure where Travis tries out for and is selected to play golf as an amateur on the Senior Tour.  As the tour continues, he finds himself qualified for and playing in the Senior Open at Pebble Beach where he advances to the final round. The miracle that takes place changes Travis and his family forever.


A year ago, Travis was an unknown golfing amateur. After winning the PGA Senior Open at Pebble Beach, he is now famous and makes his living playing the game he loves.  Everything should be perfect, but Travis wonders if he is an impostor who doesn't deserve his success, especially after a series of disappointments.

Travis gets a shot at redemption in an unexpected way, in the form of a troubled teenage outcast with a natural golf swing. This unlikely duo set out to achieve the impossible at the famous Augusta National, home of the Masters Golf Tournament. They are about to learn that sometimes the greatest miracles take place when no one is watching.


Travis McKinley has immensely enjoyed being a professional golfer on the Senior Tour. But there is a complication. To retain your playing privileges, a golfer has to finish in the top thirty-one on the money list.

Finishing the tour with a thirty-three, Travis is now off the tour and feels he is an amateur at golf and at the rest of his life. Therefore, he and his family decide to make a pilgrimage to Scotland to visit his Scottish McKinley roots and to see the mythical greens at St. Andrews, known worldwide as the home of golf. What happens next is as much a miracle as the first “eagle” Travis ever scored.


“On the course where golf was born, sacred ground to every golfer, even an ordinary man, an ordinary player, can achieve a higher plane.”


“There is no other sport where somebody who's average at best can hit absolutely magical shots on occasion.”


Stated on the jacket of Miracle at St. Andrews:


“If golf novels had a leaderboard, Miracle at St. Andrews would be at the top.”