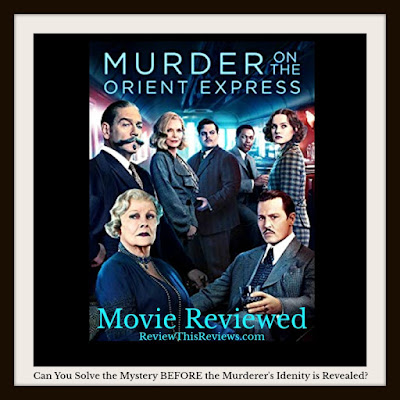 Even though I have seen several previous versions of "Murder on the Orient Express" and was very familiar with the plot, I loved this new adaptation and can highly recommend it!

I am a huge Hercule Poirot fan!  In my heart, David Suchet will always be Poirot.   His image is the one my mind's eye will see when I hear or think of the fabulous Agatha Christie detective.  However, since I am reviewing the newly released "Murder on the Orient Express" movie, I need to start by critiquing the actor that played the part of Hercule.

I was quite impressed with Kenneth Branagh who was cast as Hercule Poirot.  He also co-produced this latest version of "Murder on the Orient Express" which most likely gave him more freedom to develop the character to suit his own style and personality.  He is not an actor I was previously acquainted with, so there was no other character I had to toss to the back of my mind to enjoy his performance.

When the movie first started, I wasn't sure I was going to be able to embrace Branagh as Poirot, even for a few hours.  But, after the first 20 minutes, I was fine with him playing the part.   By the end of the movie, I was singing his praises for taking on a role that was "owned" by another actor and doing a supreme job of becoming Poirot.  I certainly wouldn't mind seeing him continue as Poirot in future movies.


The Plot of "Murder on the Orient Express"


Murder On The Orient ExpressCheck PriceI was recently reminded that not everyone is familiar with the plot or knows the story of "Murder on the Orient Express".  Frankly, I was rather shocked to learn that one of my family members that attended the movie with me had neither seen the movie, nor read the book.  Therefore, for those of you who are unfamiliar with the story, I will provide a brief synopsis.

The Belgian detective, Hercule Poirot, is precise in his every deed and action.  He would even be considered fastidious.  This is an endearing quality to those of us who believe everything should be "just so".  He is highly intelligent and uses his "little grey cells" to examine every minute detail of a case.  As Poirot himself would tell you, he is "probably the greatest detective in the world".

At the insistence of an old friend, Poirot boards the Orient Express train seeking a bit of a holiday.  What he actually got was a case of murder.  When an avalanche of snow stopped the train dead in it's tracks, one of his fellow passengers was found dead in his bed.  He had been murdered and Hercule Poirot was certain the murderer was also a fellow passenger.  He immediately started investigating the case, forcing those world famous "little grey cells" to work quickly lest another passenger should fall victim to the murderer.

He quickly deduces that the murder is somehow related to the previous murder of a child.  The abduction and subsequent murder of the child will remind you of a real case in history, the Lindbergh baby.  In fact, Agatha Christie's novel, "Murder on the Orient Express" was based on that real life murder.

Every passenger on the train is considered a suspect!
I'm not going to tell more of the plot simply because I don't wish to spoil the movie for anyone who is not already familiar with the plot.  What I will tell you, is that Poirot's own sense of justice is challenged by what he uncovers in this case.


The Actors Make the Movie


While there are a few deviations in this movie from the original novel, overall the characters were familiar enough that I don't believe it was neither a hindrance nor an improvement to the plot.  What did really matter is the cast of stars who played the parts.  These faces have long entertained us and they were all excellent choices for their respective parts.

In addition to the award winning actors and actresses, you will recognize several other faces even if you don't know their names, yet!


The Scenery in Murder on the Orient Express (2017)


The scenery is stunningly gorgeous!   In addition to an unbelievably outstanding studio set of Longcross Studios in London, some of the landscape shots were made at the border between Switzerland and Italy.  The fantastic, out of this world mountains were filmed in New Zealand.

Murder on the Orient Express (2017) Movie Review Written by: