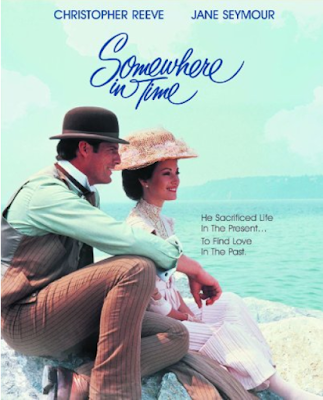 Somewhere is Time is one of my all time favorite romantic movies.  It is hard to believe, but it was released over 35 years ago.  To this day, I can hear Elise (Jane Seymour) calling out through time to "Richard" in my mind.  The agony and desperation in her voice is heart-wrenching.

Scenes from this movie were long ago impressed on my mind and they haunt me to this day.  The exquisite and beautiful Jane Seymour reaching out in time to the young and handsome Christopher Reeve is an unforgettable image of timeless love.

In case you haven't already seen the movie, allow me to introduce you.  If you have seen it, I recommend watching it again.  The beauty of a romance that erases the walls of time is just as poignant and gripping today as it was 37 years ago.  Perhaps even more so.

Synopsis of the Movie Somewhere in Time

The opening scenes of the movie take place at an after play party on May 19, 1972.  Richard Collier, a young play-writer, is celebrating the success of his play with friends when an elderly woman approaches him.  She gently places a beautiful pocket watch in his hand and softly says "come back to me".  Then she turns and leaves the building.  Since Richard has never seen her before, he is somewhat mystified by her gift and words.

Somewhere in Time (Collector's Edition)Eight years later, Richard is a writing a new play, or at least trying to write one.  It is not coming together easily for him.  Even listening to his favorite soothing music, Sergei Rachmaninoff's "Rhapsody on a Theme of Paganini", is not helping.  Out of sheer frustration he decides to take a trip, to get away from the monotony of the routine of his life in Chicago.  He simply starts driving with no apparent destination when he spots the Grand Hotel in Mackinac Island, Michigan.   For some inexplicable reason, he is drawn to the hotel and signs in to stay one night.  The elderly bellboy, Arthur, thinks he recognizes Richard, but a lot of people have come to the Grand Hotel since 1910 when he first arrived there with his father.

When Richard goes to dinner, there is a 40 min wait, so he starts exploring.  He discovers a picture of Elise McKenna in the hotel's Hall of History and is captivated by her beauty.  He wants to know more about her.  He goes to the local library to research Elise McKenna and found she was a great box office draw in the early 1900's.  She was born nearly 100 years earlier in 1885.  When he finds a photo of her in her later years, he realizes she is the woman who gave him the watch at the party back in 1972.  Now, he must know more!

He located the home of the biography writer to get more information on Elise.  The writer had a collection of McKenna's personal items, including a dress from her last play and a book she was particularly fond of on time travel.  He found out that Elise had died the same night she had given him the watch. 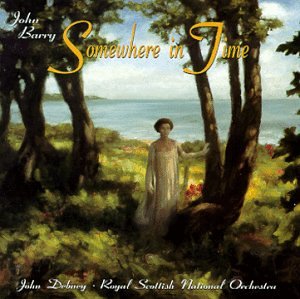 Somewhere In Time (1998 Re-recording)
You can hear the beautiful redition of Rachmaninoff's Rhapsody on a Theme of Paganini , along with John Barry's score here. Purchase if desired.As he continues to explore Elise's belongings, he is drawn to a music box designed as a replica of the Grand Hotel.  When he opens the lid, he is surprised and further intrigued to hear it plays "Rhapsody on a Theme of Paganini".

Later, when he is back at the hotel, he searches for the hotel registers from 1912 and finds his signature in the register confirming what he already suspected.  He was a guest at the Grand Hotel in 1912.

He immediately went into action.  He bought a suit from around 1912, cut his hair to match the style of the early 1900's, purchased 1912 money, and returned to the Grand Hotel.  He removed everything that was current day from his sight and made a recording to help "hypnotize" himself to travel back to June 29, 1912.  He laid on the bed, played the tape and started the process of traveling back in time.  Back to 1912.

Back to the Grand Hotel of 1912  where she preformed, and back to her.

He closed his eyes and woke up in the past, 1912, but in the wrong hotel room.  As soon as he escaped that room, he went in search of Elise.  He found her walking by the lake and approached her.
Her first words to him were "is it you?"  He answered, "yes". 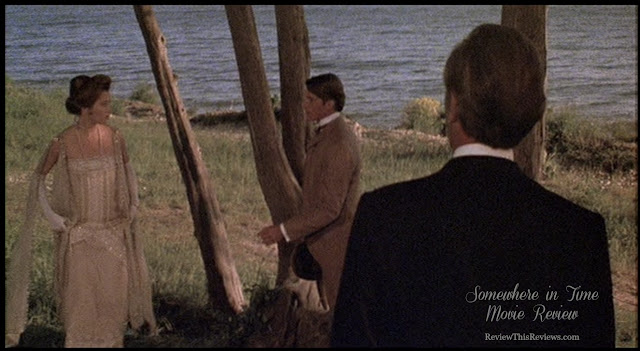 One of my personal favorite scenes in the movie is when Elise is having her photo taken after her final performance at the Grand Hotel.  Richard enters the room and right as she looks at him, the photographer captures that expression of love on her face.  That photo is the picture that is hanging in the Grand Hotel's Hall of History.

Add Somewhere In Time to Your Romantic Movie Collection Today!

Learn more about the man and his journey back to love!