Could You Survive Emigrating to An Untamed Land? A Book Review

Could You Survive An Untamed Land?

Those who emigrated beyond the American Frontier in the 1800's were a special breed. They knew they would have to conquer an untamed land in order to survive in their new homes. Laura Snelling puts us into their shoes as we read An Untamed Land (Red River of the North #1). This historical Christian novel follows two Norwegian brothers who emigrated from Norway to America with their wives and children in 1880. They wanted to homestead in the Dakota territory. One of the children was born on the ship during the journey to the United States.

The book opens with the entire family gathered together to discuss whether the brothers should emigrate. There was a great deal of emotion, since everyone knew that if the brothers left, it was unlikely they would ever see their families again. Gustav's younger brother was already in America. Roald and Carl had read his letters.

You will pick up the sadness of Gustaf as he thinks of his family separated by an ocean.  Yet Gustaf and Bridget knew their younger sons had no real way to work on their own land  if they stayed at home.


Why Did the Brothers Want to Emigrate?


The brother were part of a large family in Norway.  It was traditional for the eldest son to inherit his father's lands.  The other brothers would have to work the land belonging to others. A Norwegian journalist, Paul Hansen, who had immigrated to the Red River district of  North Dakota and Minnesota,  wrote glowing descriptions of free flat land for those willing to homestead it. Carl and Roald Bjorklund, sons of Gustaf and Bridget Bjorklund, wanted to go and build their future on their own land in the Dakota country.

Once the family had given their reluctant blessing, everyone worked to raise money for the sea voyage to America. Roald and Carl took jobs on a fishing boat. Roald's wife Anna moved in with the Bjorklund family to help Bridget and save money on rent. When they moved out, they sold everything from the house they would not need in America.  Roald and Carl's sister Augusta then got a job outside the home to help raise money.

It was with great reluctance their parents let them go. Roald had married Ingeborg after his first wife, Anna, had died in childbirth. Thoriff is their first son, now five. Although Roald and Ingeborg respected each other, Roald was still grieving over Anna, and Ingeborg liked, but did not yet love Roald. Carl was in love with Kaaren Hejelmson, and married her before they left.

So why did these young couples emigrate? Why did they leave all they had known to face hardship and danger settling in a foreign land where they didn’t even know the language? Because they wanted a better life for their children where they could have their own land and live free.

The author skips telling us about the ocean voyage, except for sharing the vivid memories the family members had as they were preparing to go ashore. You can only imagine how hard it was for Karen to give birth on the ship. She had been seasick for most of the voyage, and had been sick since the baby was born. She was so sick when they reached New York that Carl had to carry her off the ship. Ingeborg helped to look after her and the new baby and encouraged Kaaren not to give up hope. Ingeborg has discovered she is also pregnant.

As they prepared to leave the ship, Roald told Ingeborg to wait below to avoid the crowds, even though she was dying to see the ship land.  Below it was so crowded with belongings one could barely move. There was no fresh air and it stank, for many had been seasick.

Once off the ship the families were amazed to see the tall buildings and the busy, crowded dock. The families' first stop was to be Castle Garden, where they were to go through immigration. Kaaren was afraid she'd be turned away because of her illness.


Roald started walking with a load of luggage, asking Ingeborg to follow with Thoriff. Roald was walking so fast, without looking back, that she lost him. She also lost Thoriff in a crowd and not knowing English made it hard to get help. Finally someone who understood Norwegian came to her aid, and they found Thoriff, but he was already in trouble. Ingeborg meets a new friend -- a wealthy man who becomes important in the rest of the book.


Travel was hard. There were no fast food places along the way to stop for meals. Tired women had to get out of the wagons after a hard day of travel and prepare a meal over an open fire using whatever they had left of provisions and whatever meat or fish could be procured by the men. When the families finally reached their land, no home was waiting. They had to continue to live in the covered wagon until they got a home built. They had to share a cabin until they could spare time to build another one.

Since I’ve read more than handful of memoirs by pioneer woman, little in this book was new to me. But it struck me again how hard these women worked physically compared to most of us today. Their very lives depended on how well they could plan ahead what they needed when the general store might be an overnight trip or longer.

Survival on the Land


The couples got along well, and they shared the first home they built -- a sod house such as was common on the prairie. They shared the work of turning the sod, planting a garden, and later, caring for livestock. Remember, Kaaren had been sick to start with and Ingeborg was also feeling the effects of carrying a child. They were dependent mostly on each other for medical care.

There are some treatments I could not have stood to watch were they on film. We take so much for granted today -- anesthetics, antibiotics, and other modern treatments. We wouldn't want to have to sew up someone we love without them, let alone be the patient.  The only help they had was a woman who was half Indian and half white who thought the land they were claiming was really hers, since she was squatting there and thought her dead husband had title to it. She knew how to use native plants to treat illness, and without her knowledge and care Ingeborg would have died after falling and hitting her head while fishing. She lost consciousness and it was hours before anyone discovered her.

When the families finally had neighbors they were able to help each other build barns and homes and do seasonal jobs in the fields. One family could buy a cow and the other a bull for and they could share them for breeding. Best of all, they could experience friendship again in their new land.

For the first years settler families had to put all their efforts into survival -- building, planting, harvesting, food storage, and gathering wood and water. Getting a well was a big event. Schools and churches would have to come later, after basic needs were met. Everyone worked, even the children when old enough, to help care for animals, do chores, and produce food. All the while, there was the feeling of loss because family and old friends were far away in the land they had left.

Later they replaced sod homes with wood homes with real floors, like this pioneer house, built 1873 in Cass County, North Dakota for Johannes Hellestvedt from Hardanger, Norway. It is a log cabin. 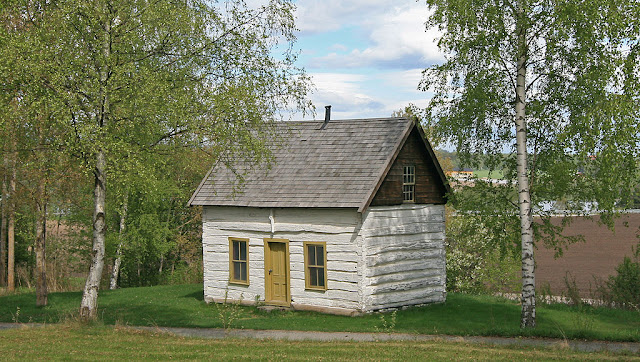 Was Coming to America Worth the Cost?


That's a judgment you, the reader, will have to make.  The Bjorklund families did get free land as they had hoped, but it exacted a very high non-monetary price from them. Their faith was seriously tested, especially that of Ingeborg. This is not your typical historical prairie romance. It is a realistic look at marriage, family life, and pioneer life on the American frontier. I would classify it as Christian historical fiction. After you read it, you will very much appreciate your life today, no matter how rough it may be.

An Untamed Land is the first in a series. I first read this book a couple of years ago, and I reread it before writing this review. I am anxious to read the other books in the series when I can find time. If you finish the first book, you will want to continue reading to see what happens next.

If you found this review useful, please share it with friends who might appreciate this book. The image below is just right for sharing on Pinterest.


What would have been the hardest adjustment for you as a homesteader in this Dakota Country?