Book Review of The Hawk and The Eagle - A Gripping Plot 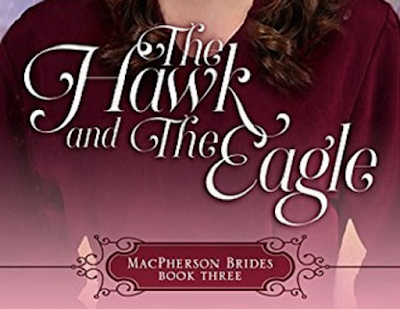 I recently read and reviewed the first book of the series, MacPherson Brides.  I loved The Rose and the Thorn and could hardly wait to read the next books in the series.  The second book, The Scar and The Star, was a good book, but I am going to skip reviewing it and move right on to the third book of the series.

The Hawk and The Eagle had a very unique plot which is always the best reason to review and recommend a book.  You would know by this selected genre to expect a budding romance.   We all expect trials of some sort to develop in the plot and we anticipate the couple ending up together in the end.  What we don't know when we first pick up a book is whether or not the plot will seem believable or if we will like the characters.

In a series of books, we have often been previously introduced to the characters.  That was the case with Nia and Adam.  Adam Lone Eagle is Thorn's best friend and the tracker who helped Thorn when needed.  Nia is Thorn's sister and it was alluded to in the first book that Nia was in love with Adam so it came as no surprise that their relationship was the foundation for one of the books in the series.  What was a huge surprise was that Nia married someone else.


Synopsis of "The Hawk and The Eagle"


The Hawk and The Eagle (MacPherson Brides Book 3)Adam was an accepted part of the MacPherson clan.  He was considered a member of the family instead of just Thorn's friend.  As a matter of fact, Thorn MacPherson was more like a brother to him.   Adam had known for several years that he would marry Thorn's sister Nia once she turned 21.  He had already built a house for them that required only the finishing touches.   His business partner, Clay, and Clay's wife, Caitlin, lived in a house on the same property.  They could easily see each other's homes across the yard that separated them.  Caitlin was also Nia's cousin, which is one of the reasons Adam chose Clay as a business partner.  Clay kept the books, while Adam handled the horses.  When Adam was called away on business, he fully expected to return and marry Nia.  Their lives only had to follow the plan, but we all know plans can be interrupted by life.

Caitlin and Clay already had one son, Sam, and Caitlin is close to the delivery date of their second child when she falls and goes into labor.  When Caitlin realizes she is dying, she pleas for a promise from Nia that she will care for her children.  With Clay lying in the next room very close to death himself, Nia doesn't hesitate to make the promise.   She loves Caitlin, Sam and her newly born niece, Lily.

Shortly after Caitlin's death, Nia is called into Clay's room where he begs her to marry him and adopt the children immediately so they are assured a protected life.  That is a difficult decision for Nia.  She loves Adam, but she and the family are certain that Clay is dying.  Acting quickly is a necessity.  She agrees and marries Clay.  This is were life interrupts Nia's plans because Clay does not die.

When Adam returns home, he is devastated to find Nia married to Clay, plus he has to watch from a close distance as his fiance struggles to make her marriage work for the sake of the children.

The Hawk and the Eagle is another excellent book written by Mischelle Creager that takes a close look at a Christian life that is far from perfect.  Just as I said in my review for the first book in this series, the author does not paint a fantastical life around her characters.  She digs much deeper and allows her characters to be human and to make mistakes.  In this particular book, I also appreciate the illustration of how other lives can be drastically impacted by those mistakes, even if the mistakes were made based on good intentions.  This is something we all need to be reminded of on occasion.


The Hawk and The Eagle (MacPherson Brides) Book Review & Recommendation Written by: