The Rose and The Thorn (MacPherson Brides) Book Review 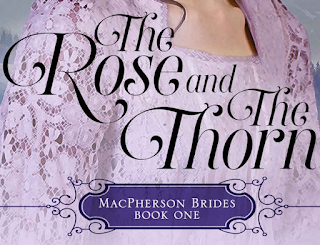 I was initially drawn to this book because of the title, The Rose and The Thorn.  I was not familiar with the author, but decided to give the book a chance.   After all, I needed a new book to read and the title piqued my interest.  Since it was in the romantic Christian fiction category, I felt pretty safe.

As it turns out, I am really glad I took a chance and read this book!  I finished reading it last night and immediately downloaded the next two books from the series.  I never want to be without a book and finding a series I enjoy is always exciting!

It turns out that the book title was a play on the main characters names, Sarah Rose Greer and Thornton MacPherson.  Unlike many of the Christian fiction books I read, this book delved into some really painful experiences including rape and spousal abuse.   As a rule, I prefer books to be more lighthearted.   I have oft said there is enough sin and pain in the real world, I don't want it in my entertainment.  But, this book was more insightful about the impact of those actions on the victims.  In my opinion, the author struck just the right balance.  Nothing got too graphic to handle and the victims weren't wimpy, whinny little creatures.   They were strong women with real issues that they confronted.


Synopsis of "The Rose and The Thorn"


The book takes place in the 1800's when women were not considered equal to men.  It was also a time of arranged marriages, or at least marriages that were established based on social and economic background.  Marriages that were beneficial to families and not founded on love were much more commonplace.  Such was the marriage that was forced upon Sarah.

The Rose and The Thorn (MacPherson Brides Book 1)At 16, Sarah's parents died.  She and her little brother moved in with her wealthy grandfather who immediately made marital arrangements for Sarah with an older man who was deemed a good business partner for her grandfather.  Against her wishes, she married a stranger who turned out to be a real monster behind closed doors.  The inescapable marriage lasted 13 years.  After her husband was murdered by the mother of one of his rape victims, Sarah, her brother and the child she adopted, moved away from her grandfather and Boston.   As the named heir to her husbands wealth, Sarah was able to purchase a home for her little family and start a new life in the small, but growing, mining town of Central City.

Unfortunately, her brother still worked for their grandfather.  Not because he wanted to, but because it was his "duty" to expand their business into Central City.  Even though he was out of his grandfathers home, he was still controlled by him through his grandfather's manager, Stanley.

Stanley had plans himself for the new wealthy widow.  He knew that if he married Sarah, he would not only control her money, but he would have equal standing with her grandfather, not just his employee.  His scheming backfired on him though and Sarah ended up being forced to marry Thornton, but this time it was a decision she made to protect her reputation and her adopted daughters future.  However, Thornton was just as much a stranger to her as her first husband had been when they "walked the aisle".

The analogy of the rose and the thorn became obvious almost immediately after Mr. and Mrs. MacPherson were united.  Both Sarah and Thornton had survived their previous spouses, but they still struggled with issues from their past.  Those experiences tainted and affected their relationship.


As I have previously stated, Christian fiction is my preferred genre, but I am often annoyed by how an author will present life as being easy for Christians.  They want readers to accept that God is going to make everything wonderful in their lives and that everyone will live happily ever after.  Since Christianity is not a fairy tale, neither is the life of a Christian.

I appreciated the fact that this author, Mischelle Creager, did not paint a fantastical life around her characters.  As a reader, I may not want to be bludgeoned with horror and gore, but I also don't wish to be assaulted with stupidity and completely unbelievable characters.  For the most part, this book was realistic without being too real.

The Rose and The Thorn (MacPherson Brides) Book Review & Recommendation Written by: