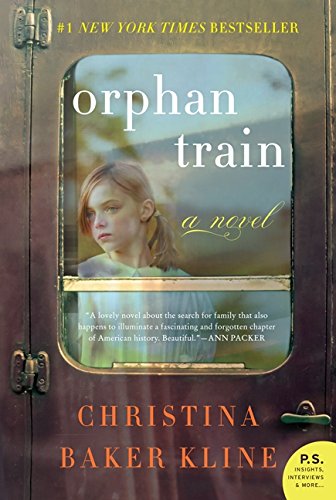 My husband wrestled another really, really, really good book out of my hands and forced me to read Orphan Train.  He said I had to read this book before I could have the other one back because this book was a book club assigned reading and the discussion date was quickly approaching. Fortunately for me, Orphan Train was an equally good book and I had no trouble immersing myself into the historical story that unfolded on its pages.

Orphan Train is a fictional novel based on true events that was written with those in grades 9 through 12 in mind but that is suitable for all ages, not just children. It tells the story of orphaned children between the years of 1854 and 1929 who were rounded up in the cities of the East Coast of the United States and put on trains destined for towns near the farms of the Midwest. It chronicles their lives before, during and after the train ride, flipping back and forth between the Maine of today and the Minnesota of the Depression. It tells a story of struggle and strife, love and despair, second chances and love, focussing on two main female characters, Vivian Daly, a 91-year old whose life path was altered by her trip on the orphan train and Molly Ayer, a 13-year old modern-day orphan who is struggling to find herself. It is, most definitely, a coming-of-age novel that looks at the events that shaped two females of very different generations.

Are There Any Issues With This Book?


Some in my book club and of course many other readers have expressed disbelief at a life changing choice made by one of the major characters later on in the book. Others agreed with the author's and the character's decision and could understand why she might have made that decision. I uncovered a video in which author Christina Baker Kline explains her decision about that moment in the story. I am sorry to be cryptic but do not want to give away any secrets in my review. That video, Christina Answers Top 10 Book Club Questions, is a spoiler. I do not recommend it unless you have read the book first.

What Else Should You Be Aware of?


Guest commenter Cynthia, thought the book well worth reading. However, she cautions that "It does use a lot of expletives that she is not used to reading (though she hears them) and that it does get a bit too graphic at one point, but says that she thought it was realistic." Adding, "As long as readers understand things get a little "tough" then she would definitely recommend reading it."


Yes, YES, yes. I definitely would recommend this book. Christina Baker Kline's Orphan Train spent more than 90 weeks on the New York Times best seller list with five weeks in the number one position and more than a year in the top five books on that same list, which really vouches for the book.  However, it is important to know that it is a very well written, easy and interesting read that harkens back to a part of American history that was not always pretty.

Amazon says that Orphan Train is both rich and epic. That it is powerful, sharing a story of change and strength, friendship and secrets. I agree. It is a great story, one that you will not want to put down until you find out what happens to Vivian and Molly.

Have you read this book? If so, what did you think of it?