Review of Either Side of Midnight by Tori de Clare


Warning! I Could Not Put This Thriller Down!

I don’t often start a book I think is a thriller or has the kind of suspense that makes me unable to put it down. I really didn’t realize Either Side of Midnight was going to capture me the way it did. But I could not put it down. I read until too late at night, and then had to finish the book the next morning before I could do any real work. So I give you fair warning – don’t start this book if you have urgent tasks to get done or if you really need to get a good night’s sleep. 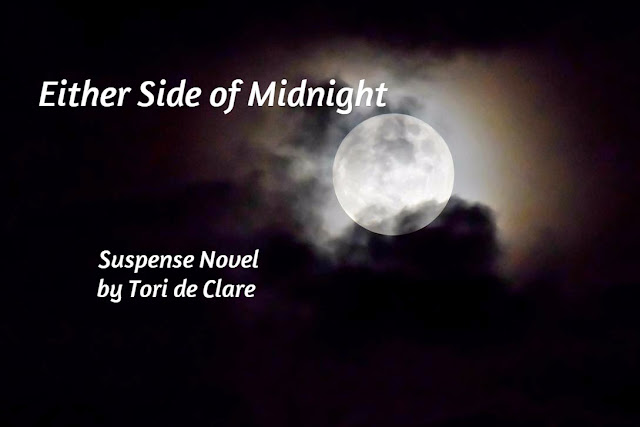 
It’s very hard to go into detail about the plot without spoiling it for you. We first meet Naomi Hamilton Stone six hours after her wedding, just after she steps out of the shower before consummating her marriage. She then discovers her special cross necklace is missing – the one she’d never taken off her neck except to replace it with a borrowed family heirloom for the wedding. She searches her room for the necklace, and realizes that in all the confusion after the reception and travel, it must have fallen out of the travel bag and been left behind in the car.

With little on but her underwear, Naomi throws on her coat and ties the belt tightly at the waist and tells Nathan  she is leaving to go to the car to get her necklace and will then be back to meet him in bed. He implores her to wait for him to dress and go with her, but she is already out the door before he can finish dressing. He has not yet caught up with her, and she is obviously enjoying the chase. They talk and flirt on their cells as she bounces down the hotel stairs as he is trying to dress and follow her. She is almost to the hotel door as he says he is leaving their room. They continue to tease each other as he tries to catch up

She finally reaches the car and as she is unlocking it, a figure in a dark balaclava lunges at her and grabs her phone and she can hear Nathan calling her name, as the abductor tells her not to scream. There is a knife touching her side. She is forced to stumble along, feeling the knife against her bare skin, her head beneath what seems to be a small wool blanket. They finally stopped. Her hands were bound, but she continued to fight and struggle to no avail. A car door opened and her head hit something solid as she realized she was being shut into the trunk. She thought she heard Nathan pursuing the car before she slipped into unconsciousness.

From here on it gets more exciting, with amazing twists and turns. One was so subtle I thought the author must have made a mistake in the character’s name, but after rereading a couple of times, I realized it was just another twist.

I’ll skip what comes next except to say that just as Naomi thinks she is being buried alive in an old open grave, the book flashes back to her parents, driving home from the wedding. Naomi’s mother Camilla  continues to complain about the groom, convinced Naomi has ruined her life by marrying him.  Naomi was a promising music student who had just finished her first year at the Royal Northern College of Music. Camilla had great plans for her. Naomi had been a serious student of piano – unlike her twin sister, Annabel, who cared only to be a social butterfly.

The book keeps jumping from Naomi’s current predicament to the events leading up to it – moving into her rooms at school, learning to make friends, meeting Nathan, who was not a student there, and their courtship. We also see the dysfunction  of the Hamilton family, the competition between the twins, and some of the secrets Naomi has finally told Nathan. We meet Lorie, the employee that is responsible for keeping the Hamilton household running smoothly, but who has also become Naomi’s friend and confidant. We meet Tom, the ex-boyfriend who has badly hurt Naomi.


I loved this book, but I wish the author had made more obvious breaks when moving from one scene to another. I found it a bit disorienting to move from one setting to another with no white space or line breaks to alert me. One minute I’m with Naomi and Nathan spending time together and in the next paragraph I’m back at the Hamilton household or in another flashback. Most of the time, though, there is a chapter or a break in the text to keep one from getting too confused.

Although there is lots of suspense, there is not much violence or gore. I appreciated that. Most of the language was clean, too, and there was no explicit sex.  I would recommend this book to anyone who is prepared to read it in one sitting. It took me several hours to finish it. I’m dying to read the sequel. Unfortunately, though it's been a year since this was published, no sequel has been published yet.

to those who love suspense and who don't mind a little mental exercise in following the abrupt changes in the setting. Since I read this, the sequel, The Darkness Visible, has been published. Get both books together so you don't have to be left hanging at the end of Either Side of Midnight.


For more of my book reviews, please see my blog, Bookworm Buffet.