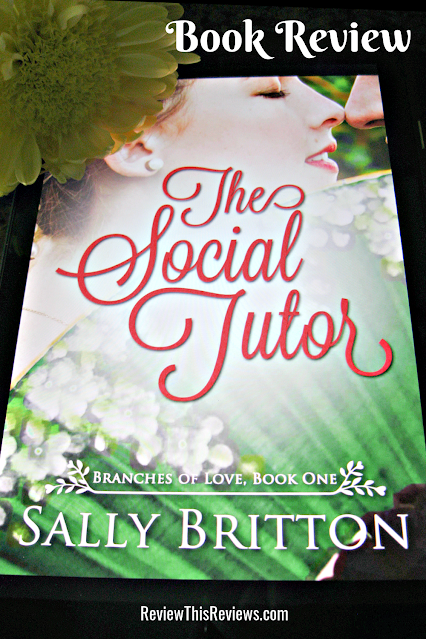 If you are looking for a sweet, romantic easy to read book, you will love "The Social Tutor" by Sally Britton.  It is the first book in her Branches of Love series and quite a delightful read.


Earlier this week, I was without electricity for approximately 5 hours. Since I couldn't cook, work around the house due to the dark, or even work on my computer, I grabbed my Kindle and settled in to read. I opened it to "The Social Tutor" and was immediately allowed to relax as I was pulled into a lovely story set in the early 1800's in England. A time when women were expected to marry someone who benefited their family whether they were in love or not.

I am a huge historical fiction fan and I prefer clean romantic stories. "The Social Tutor" was the perfect choice for me!  When the electricity was restored, I was already so deep into the book that I didn't set it down until I had finished reading the entire book.

It had been made perfectly clear to Christine Devon that she would marry someone who would bring wealth, business associations and hopefully a title to her family.  Her father would give her one season in London to complete this mission.

Christine was the second daughter in the household. Her older sister had failed to make the desired alliance and was relegated to overseeing her father's household. He would not waste any more money on her.

The Social Tutor: Branches of Love, Book 1Check PriceBecause she was under so much pressure, Christine knew she would need help. Since her mother had died years before, she had never been taught how to attract a man's attention, engage him in an acceptable conversation, and make him choose to marry her out of all of the eligible young women in the "marriage mart".

Thomas Gilbert had been friends with Christine's mother. They had shared a love for horses and Mrs. Devon had taken him under her wing to teach him about horses. It was Thomas's desire to add a horse breeding venture to his family's farm.  With the right horse selections, he believed he could bred champions and sell them to society members who demanded the best.

Christine decided she would ask Thomas to tutor her. In exchange for the lessons, she would allow him to borrow the horses she had inherited from her mother.  Even though Thomas wasn't exactly sure at first how he could help her, the offer was too good for him to pass up. After all, Miss. Devon owned the best horses in the area and their offspring would be highly desired.

They agreed to meet every 3rd day until Christmas (only a few months) to prepare her for the social season which would begin immediately thereafter.  Thomas had no idea just how naive and trusting Christine was.  He knew she would be eaten alive by both the men and the women of society and he suspected that is what happened to her older sister. Without their mother's direction and oversight, it would be like a lamb among wolves. Out of loyalty to her mother, he could not let that happen to Christine.

Perhaps, you think you have already figured out what happens. Maybe you have, maybe you have not. Either way, it is a charming romance to read. I have no doubt, you will want to continue reading through the entire series.


The Social Tutor Book Review by: