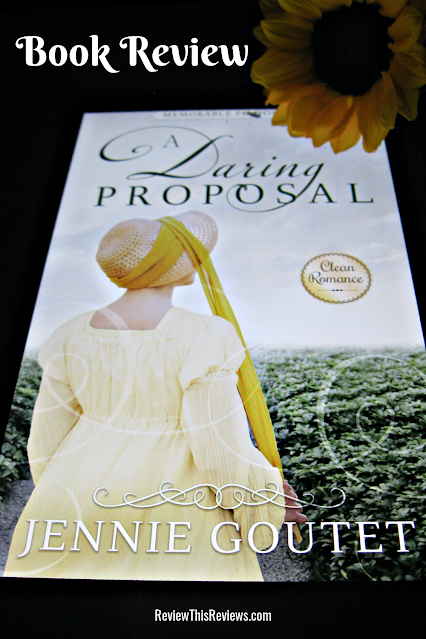 I rarely read a series where I would say the author saved the best book for last, especially when I enjoyed all of the books in the series. However, in the case of "A Daring Proposal", I do think Jennie Goutet saved the best 'til last.

Perhaps this book was my favorite because the main character has been a part of the previous two books and I already liked her. Maybe, it was because I just liked the true historical story line so much. Most likely, it was both.

Each of the books in the series could be read independently, but I do think, in this case, Phoebe Tunstall's character was developed over the entire series. Therefore, even though it is my favorite, I think the series should be read in order. Otherwise, you might miss just how unusually "daring" Phoebe becomes in "A Daring Proposal".

Phoebe Tunstall has already enjoyed four London seasons. There is a concern that she may well end up being considered "on the shelf" by potential suitors. At 22, she is far from an old maid, but society tends to focus on the newest, brightest stars that appear on the scene. Phoebe was not looking forward to another season, especially since her sister, brother, and best friend were all now married. She would feel alone in the crowd.

A Daring Proposal (Memorable Proposals Book 3)Check PriceBecause she often stayed in her vivacious sister's shadow, Phoebe was viewed by society as shy, perhaps disinterested or unavailable, as she attended to her elderly aunt. Something Phoebe shared with no one, including her twin sister, is that her heart was unavailable. For as long as she could remember, she had loved someone who viewed her "like a little sister". Still, she realized she needed to marry, even if it wasn't a love match, and a fifth season might be her last chance.

When her friend, Lydia, suggested she accompany her and her husband to Brussels instead of staying in London, Phoebe surprised herself by considering it. As she mentally recounted Frederick Ingram's suggestion that she do "something daring", she decided she would do just that and accept his sister, Lydia's, invitation to go to Brussels. She would cast off this despair, all expectations and embrace the opportunity to travel somewhere new.

That turned out to be the best decision she could make because "somewhere new" offered her the opportunity to be someone new. Well, at least, someone new to Brussels society, where she was immediately received as a desirable partner at every ball & social gathering.  Little did she expect to catch the eye of someone she had known all of her life or to be caught in the middle of a war.

We may not immediately think of Brussels as the setting of a war, but it was in fact, the location of the Battle of Waterloo, which ended with the final defeat of Napoleon, and as in all wars, with many deaths.

Jennie Goutet did a masterful job of threading the story of "A Daring Proposal" into the fabric of real historical events and real people.

This entire "Memorable Proposals" series is truly wonderful. I highly recommend all three books to anyone who enjoys historical romantic fiction, but especially "A Daring Proposal" because of it's historical accuracy.

I previously reviewed the first book in this series and you can read that review here: A Regrettable Proposal

Currently, all of these books are available for free with a Kindle Unlimited membership

A Daring Proposal: A Regency Romance (Memorable Proposals Book 3) by Jennie Goutet by: