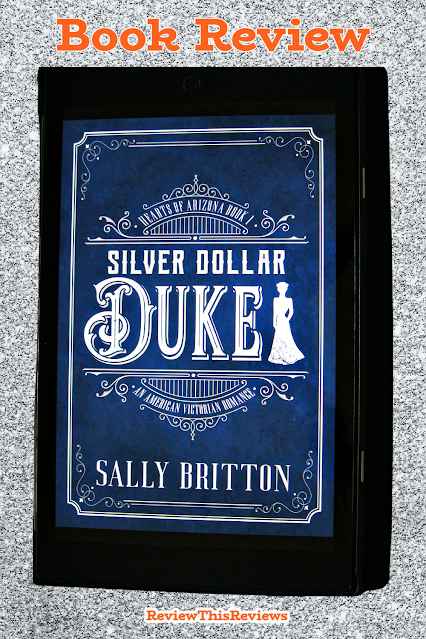 I am quickly becoming a big fan of historical fiction books written by Sally Britton. Previously, I read the Supposed Scandal series and loved all three books.

Silver Dollar Duke is the first book in the "Hearts of Arizona" series and I really enjoyed the story. I have no doubt I will love the next 2 books in this series as well. I plan to start reading the second book, Copper for the Countess, immediately.

I wasn't sure how an American silver dollar would relate to an English duke, but I was rather intrigued by the title. Turns out, the silver dollar played a big part in the duke's life, but I won't ruin that touch of mystery for you by sharing that significance in this review.

This is a rather light, entertaining read that any historical romance fiction fan would enjoy. In most of the books I read, the female is the central focus of the story. While there is a prominent female character, the duke and his childhood dreams are the highlight of this book.

As the second son of a marquess in England, Evan Rounsevell had his life mapped out for him. He knew he would be required to “work” for his father even though all of the family property would be inherited by his older brother, and then his brother's son.

Silver Dollar Duke: An American Victorian Romance (Hearts of Arizona Book 1)Check PriceDuke didn't resent the expectations or family obligations, but he did have a lifelong dream. As a child, he had met Buffalo Bill and had seen him perform. Duke wanted to visit the wild west of America and experience being a cowboy firsthand before he was completely entrenched in England. He spent his childhood learning to shoot, practicing lassoing a cow by lassoing sheep, and riding horses. As an adult, he knew he would have to run away for a little while to have the opportunity to make his dream come true. That is exactly what he did!

Duke quickly found himself running out of money as he traveled across America. He needed a job to continue his adventure and for his return ticket home. When he met the Bolton brothers in Tombstone, Arizona, they offered him a job as a ranch hand on their father’s ranch along with the promise of getting to participate in a cattle drive. Duke was thrilled by this fabulous, once in a lifetime opportunity. It was exactly what he had always desired.

There were some unexpected experiences in his wild west journey including falling in love with the ranch owner's daughter, Daniella "Dannie" Bolton.

The last thing Dannie needed was another "temporary" man in her life. From the very beginning, Duke had made it clear that he had to return to England. They agreed to be friends and nothing more, but the "best laid plans" often go awry. 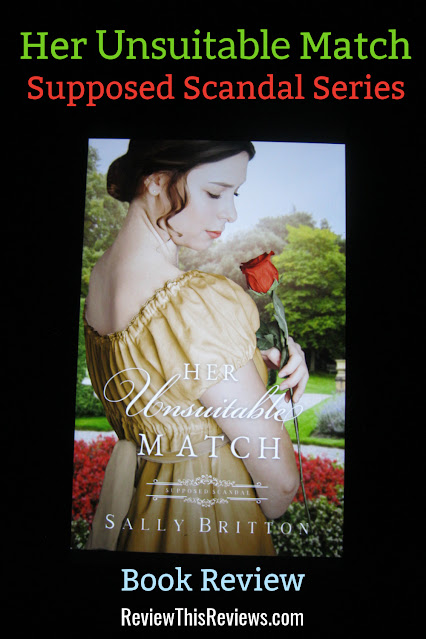 When determining if someone is an unsuitable match, we must first consider the criteria. Society may look at financial status or social status of an individual, while the person desiring a match may be seeking something totally different.

I suspect we have all known couples we felt were ill-matched but seem completely happy with one another.  There are a variety of reasons why we wouldn't think they would be a good fit.  The heart rarely looks at social status, education level, finances, or even physical looks based on the current day opinions or popularity.

In the book, "Her Unsuitable Match", I questioned whether the title referred to the individual her family had selected for Pippa, or if it was based on the individual Pippa selected.  Either way, both sides thought someone was an unsuitable match for the Earl's daughter.

However, what was most interesting about this book was that Pippa didn't seek someone based on any of the previously mentioned criteria.  She wanted someone who would allow her to be free, which meant she needed a husband who didn't make any demands on her, her time, or her money.  Interesting dilemma for a Regency era (1795-1820) setting.

Lady Philippa Gillensford is 23 years old, past the expected age for marriage.  Wishing for his daughter to have some choices in life, Pippa's father had stipulated in his will that she would be given her own dowry if she was unmarried at 23, as an inheritance so she could live independently.  That is exactly what she wanted, but her mother and her oldest brother who was now the Earl, had a totally different opinion and they were determined to have their way regardless of the cost.

Her Unsuitable Match
(Supposed Scandal)Check PricePippa's mother wanted her to marry someone equal or of greater social station.  Her brother had someone specific selected and had already granted Lord Walter permission to marry his sister.  Pippa was repealed by the very presence of Walter who sought to marry her even if he had to ruin her reputation to do so.

Lord Walter Ruthersby (the suitor), the dowager Countess of Montecliff (her mother), and Richard, the Earl of Montecliff (her brother), colluded to force Pippa into this alliance and marriage.  All of society seemed determined to see Lord W & Lady P wed, especially once there was gossip and a touch of scandal associated with the couple.  But Pippa knew she was innocent and she had no desire to marry anyone, especially Ruthersby.

Pippa did have one very strong alliance of her own.  Her younger brother, Adam and his wife, Elaine wanted her to be happy. They were blessed with a marriage based on love and they would have preferred that for her, but Pippa didn't have any love interest. She did, however, desire independence and they supported her choice.

When the earl refused to give Pippa her inheritance, she sought legal counsel.  Even though she was willing to pursue her rightful inheritance in court, she knew that might not be successful.  However, marrying someone else would end that ridiculous torment. Recalling a man who had stepped in to defend her, she decided to make an offer to a soldier.  A gentleman she hoped would join in a contract that would be mutually beneficial without the normal marital confines.

Myles Cobbett had returned from war with severe battle scars, both physically and mentally.  He found a reclusive lifestyle with a daily routine, along with his small pension, provided a tolerable life. He didn't really have hope for more. When he was presented with an unusual marriage contract, he felt needed again and compelled to assist the damsel in distress. He believed he could provide the shelter from social norms that she needed and she offered to provide dowries for his younger sisters to hopefully ensure better marriages for them.

The marriage arrangement seemed like the perfect solution for both Pippa and Myles, but the aforementioned alliances against Pippa were not sated and they were relentless.  After all, marriages could be set aside by annulments and jealous gossips still wagged their tongues with reckless abandon.

It is impossible to not like Myles Cobbett and to feel sympathy for Pippa.  In spite of her social standing, they are the underdogs we all want to see succeed.

While not your typical romantic novel, this book does pull at the emotions of the reader.  We would all love to see these two people happy.

I read the book in two evenings.  It was rather hard to put down.  I wanted to see what was going to happen, who would succeed in their pursuits and what inevitable changes would have to be made.

I do highly recommend this book for the hopeless romantic and those who enjoy rooting for the underdog.