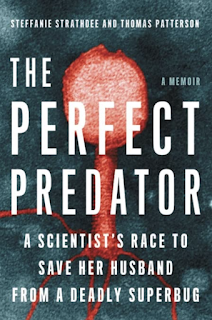 Imagine being on vacation halfway around the world when your robust loved one is suddenly struck down by a mysterious condition that is immediately life-threatening. By the time you can get your partner on a medevac from Egypt, to Germany, and then back home to San Diego, his chances of surviving are slim to none.

The Perfect Predator is as real world as it gets. This medical thriller memoir could soon be your story, or mine. Thomas Patterson's life-or-death struggle against the deadliest antibiotic-resistant bacteria in the world is no longer an isolated phenomenon. By 2050, someone will die every three seconds as a result of antibiotic-resistant bacteria. It's already happening far too often—death by superbug.

By the time Patterson's diagnosis is made, his medical team soon runs out of answers and treatment options. It will be his wife, Steffanie Strathdee, an infectious disease epidemiologist, who refuses to give up... refuses to lose hope. Ultimately, it will be Strathdee's detective work that saves her husband's life.

Sometimes, the way forward is backward. One hundred years ago, before the advent of antibiotics, scientists were exploring phage therapy. Phages, which are viruses that prey on bacteria, though promising, were largely forgotten when antibiotics became the golden drug, the go-to treatment for infections.

While reading this book, I became completely blown away by the science, and wonder, of phages. They are everywhere (including within our bodies). A single drop of water may host a trillion phages! It turns out the right phage, aka The Perfect Predator, can take down even the deadliest of superbugs.

With the assistance of a rapidly deployed dream team (including key people from the FDA, Texas A&M University, the Navy, and the University of California San Diego), Strathdee and Patterson achieve an impossible outcome: a sure death is defeated.

If ever there was a timely read, this is it. The Perfect Predator is not only an exceptionally enlightening examination of the state of medicine in a world battling rampant global health emergencies, but it is also the kind of hero's journey that proves the power of one (plus one, plus one). One individual can make a difference, especially in combination with even a small community of people willing to go all out to achieve the impossibly possible.