A Review of Making Pickles Without Canning 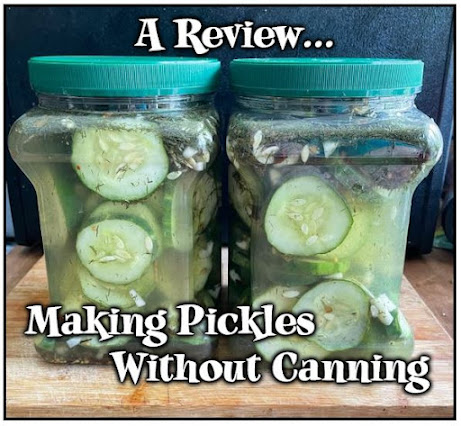 If you have ever made pickles with a hot water bath canner, there is a good chance you ended up with rubbery, soggy pickles with no crunch.  I did!  I tried many different recipes and even tried adding an envelope of some stuff I bought that was supposed to keep your canned pickles crunchy. They were still awful.  I had pretty much given up and resigned myself to forever buying pickles from the grocery store which was a real shame since we grow our own wonderful cucumbers every summer.

One summer day about three years ago, I was talking to a friend of mine on the phone and lamenting about the sheer number of cucumbers I was getting from my garden when she asked me why I didn't make pickles.  I told her of my lack of success in pickle making and she told me about the cold pack pickles she makes every summer.  I was shocked!  I had never heard of making pickles cold, but I had to admit that it made sense, if you wanted them to stay crunchy.  I wrote down the recipe and immediately checked the cupboards to make sure I had all the ingredients, which I did!

I could not believe how easy it was to make these pickles!  It did not take any special equipment, all I needed was a large bowl, a knife, a ladel and a jar.  It didn't even have to be a mason jar, any jar with a tight fiting lid would do.  I decided to use some large containers I had saved from some deli pickles I had bought for my husband.  That was another great thing about this recipe, you did not have to make 10 jars at a time and spend a whole day pickle making.  My friend's recipe made two jars at a time and took only a few minutes to make. I remember thinking to myself "this has got to be too good to be true!"

Here is what you need:

I was lucky, I had all this stuff left over from my prior pickle mishaps and I grow fresh dill in my garden, so I didn't have to go to the store, but if you do, you can get all these ingredients at any large grocery store.  If you don't grow your own cucumbers, just buy some at a produce market.

Making them is really easy, here's how:

Wash and cut up your cucumbers.  You can cut them as rounds or as spears, the shape is up to you.
Mix the water, vinegar, chopped dill, sugar, garlic, salt, pickling spice, and red pepper flakes in an extra large bowl and stir till the sugar and salt dissolve.
Place the cucumbers in the bowl and stir gently.  Make sure all the cucumbers are fully immersed in the liquid.  Place the bowl on the counter and let it marinate for 2 hours, stirring occasionally.
Take your freshly washed jars and put a sprig of fresh dill in each or a pinch of dried dill, if you don't have fresh.
Ladel the cucumbers and pickling liquid evenly into the two jars and screw the lids on tightly.  Shake each jar and then place them in the refrigerator.
In ten days you will have delicious dill pickles, cold and crunchy.  If you have any left over juice, you can put it in a jar and keep it in the refrigerator till you have some cucumbers to add to it!

Tracey Boyer, a long time writer, loves reviewing a wide variety of things such as movies, books, video games, television shows, and products. Her reviews are honestly written, as a person that has experienced the item being reviewed first hand. If you would like to see more of her work, check out her website Homemade by Jade where you will find blogs, crafts and patterns. You can also find her on Facebook, Pinterest, MeWe, Gab and Twitter.