Book Review: The Promise Between Us by Barbara Claypole White

The Promise Between Us is a novel about a group of people living with varying degrees of anxiety. Trying to get through each day is difficult enough, then add to that that some of them are trying to keep their individual past traumas secret. The characters are flawed and their lives are complicated and messy. 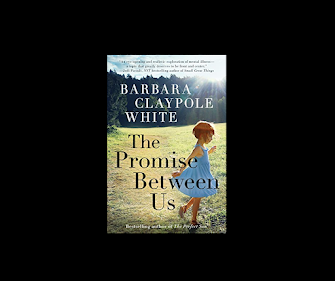 The Promise Between Us by Barbara Claypole White

Maisie MacDonald, 5th grader, is a quirky, young girl living with her father and step-mother. Her mother passed away when she was very young. At least, that is what she has been told. On the outside, to those who meet her, she looks and sounds confident. She has her own style of dress and is quite able to self-advocate. On the inside, she is constantly worried about things such as whether she's been bad or disrespectful. If those around her are going to die and if they do it will be her fault.  She tries to keep her fears and thoughts secret but they are starting to show to those observing her.

Callum (Cal) MacDonald is Maisie's father. He would do anything to protect his daughter. Cal has recently married Lilah. Together, they are working together to sort out the intricacies of becoming a family. They are aware that Maisie has some anxiety; especially about transferring to middle school after 6th grade.

Uncle Jake,  "who's Dad Point Two" as Maisie refers to him, is a family friend (Cal's best friend) who has helped raise Maisie thus far. On one hand, he is a shallow, handsome actor. On the other hand, he cares for Maisie deeply and probably understands her the most.

Katie Mack is an artist that is volunteering at a program for 6th graders.  Even though Maisie is only a 5th grader, she and her friend have been enrolled in this program. Katie and Maisie meet at the art museum. Katie has struggled with debilitating (life-threatening) anxiety and OCD with fire being one of her main fears. She responded by taking control of those fears to the best of her ability and learning to weld and create metal sculptures. Maisie is drawn to Katie's work.

Personal Thoughts About The Promise Between Us

Perhaps I enjoyed this story so much because I work with children who have a variety of mental health diagnoses. Day after day, I am both exhausted by the work AND exhilarated by something said or done by these unique individuals. Day after day I have the thought that if we (the allegedly "normal" folks) tried a little harder to listen or understand our lives would be that much more enriched. Instead, we generally try to teach others to "act right" or "behave" or think a certain way. I enjoyed The Promise Between Us because of it's real portrayal of characters who are struggling.

There are a small number of reviews that mentioned their dislike of the repetition in the story. The truth is, that is the reality of anxiety and Obsessive Compulsive Disorder. Repetitive and intrusive thoughts that occur over and over and over.  That sort of repetition is what real humans live with on a daily basis. Although, difficult to read at points (yes, it is repetitive) it is part of what made this story so believable and made the characters real. If the repetition irks you, imagine what it is like to try to live a productive life with that happening in your head.

Warning: This book deals with difficult subjects related to anxiety, OCD, and trauma. There are difficult scenes in the story that may trigger some people.  And if it were a movie, it would carry a warning for nudity/sex.