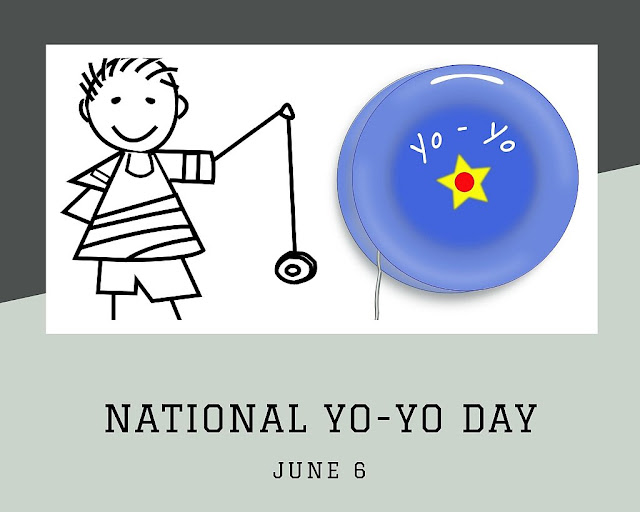 National Yo-Yo Day is celebrated each year on June 6.

History of the Yo-Yo

The yo-yo came to the United States with Pedro Flores, a young immigrant from the Philippines. Pedro remembered playing with a toy called a bandalore and it inspired him to create the toy he called the Flores Yo-yo. “Yo-yo" means “come-come” in the Philippine language.

Flores manufactured his Yo-yo between 1928 and 1932 in Santa Barbara, California. He realized that people had to be shown how to use the yo-yo before they would buy it. He hired a team of yo-yo masters to demonstrate all the tricks you can do with it.

When Donald F. Duncan, Sr., a Chicago businessman, inventor and toy manufacturer, spotted this toy while on a business trip to California, he realized its potential as a popular new toy. Duncan eventually purchased Flores' company and the 'Yo-Yo trademark. Subsequently, this wooden toy became known as the Duncan Yo-Yo.

Duncan was the country's leading yo-yo producer until after the trademark expired in 1965, when competing plastic yo-yos began outselling the old-fashioned wooden Duncan Yo-Yo.

Today you can still get the wooden style yo-yo, along with a wide variety of plastic Yo-yos in many colors and styles.

This fun holiday began in 1990 when it was founded by Daniel Volk. June 6th is the date of Donald F. Duncan's birth in 1892.

Daniel Volk once worked for the Duncan Toy Company as a yo-yo demonstrator. He toured the country from 1976 to 1978. At one point he met two brothers (The Smothers Brothers) who had a music and comedy act and taught them how to Yo-Yo. This led to the creation by Tommy Smothers of the Yo-Yo Man, a mostly non-speaking character who was a comedic performer of tricks using a  yo-yo. The term "Yo-Yo Man" is registered in his name.

As you can see, from it's humble beginnings as a simple toy from the Philippines, the Yo-Yo became a very popular American toy. So, on June 6th, it is only fitting to celebrate the Yo-yo's history by picking up a new yo-yo and testing your yo-yoing skills by trying as many tricks as possible. Do you know how to do the pinwheel or walk the dog?

National Yo-Yo Day is reviewed by